Yen falls broadly in Asian session today after BoJ stands pat and even maintains a dovish bias. 10-year JGB yield also tumbles after BoJ reiterates the pledged to defend the cap. Dollar, on the other hand, rises broadly, and it’s trading as the strongest one for the week so far. Euro and Sterling are the worst performers for the moment but selloff is picking up in Aussie and Kiwi too. 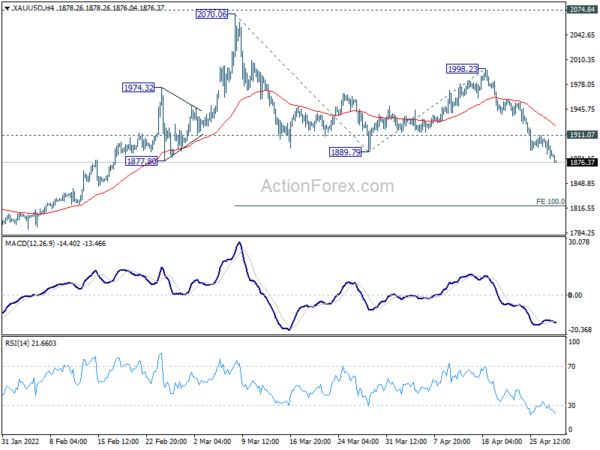 BoJ left monetary policy unchanged as widely expected, by 8-1 vote, with dove Goushi Kataoka dissented again. Under the yield curve control framework, short-term policy interest rate is held at -0.10%. 10-year JGB yield target is kept at around 0%, without upper limit on JGB purchases. BoJ also clarified that it will offer to purchase 10-year JGBs at 0.25$ every business day through fixed-rate purchase operations.

The central bank also reiterated that it will “expanding the monetary base until the year-on-year rate of increase in the observed consumer price index (CPI, all items less fresh food) exceeds 2 percent and stays above the target in a stable manner.”

It also pledged that it “will not hesitate to take additional easing measures if necessary; it also expects short- and long-term policy interest rates to remain at their present or lower levels.”

In the new economic projections, GDP is forecast to grow:

CPI (all items less fresh food) is expected to be at: 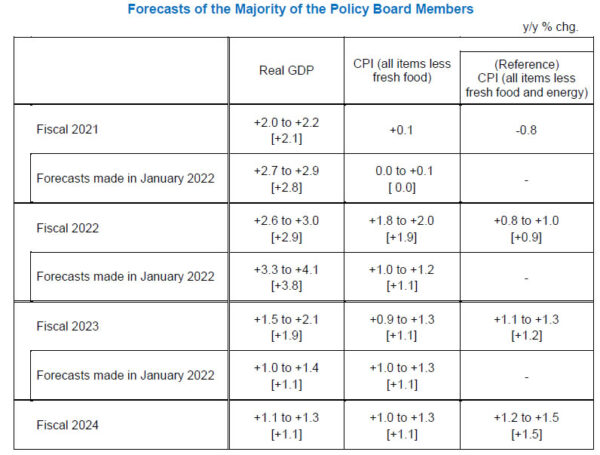 New Zealand ANZ business confidence ticked down to -42 in Apr

ANZ said: “With plenty of wage and other cost inflation in the pipeline, it’ll be some time before the RBNZ can conclude that they’re getting ahead of the inflation game. We continue to expect another 50bp hike in May, and steady 25bp increases thereafter taking the OCR to a peak of 3.5%.”

As a result of the monthly deficit in March 2022, the annual goods trade deficit has further widened to reach NZD -9.1B for the March 2022 year.

Germany CPI flash is a focus in European session. Eurozone will release economic sentiment indicator. ECB will publish monthly bulletin. Later in the day, US advance GDP will be the main focus, together with jobless claims.

USD/JPY’s up trend resumed by breaking through 129.39 temporary top and intraday bias is back on the upside. Immediate focus is now on 130.04 long term projection level. Sustained break there will carry larger bullish implications. Next near term target is 61.8% projection of 121.27 to 129.39 from 126.91 at 131.92, and then 100% projection at 135.03. On the downside, break of 126.91 support is needed to indicate short term topping. Otherwise, outlook will stay bullish in case of retreat. 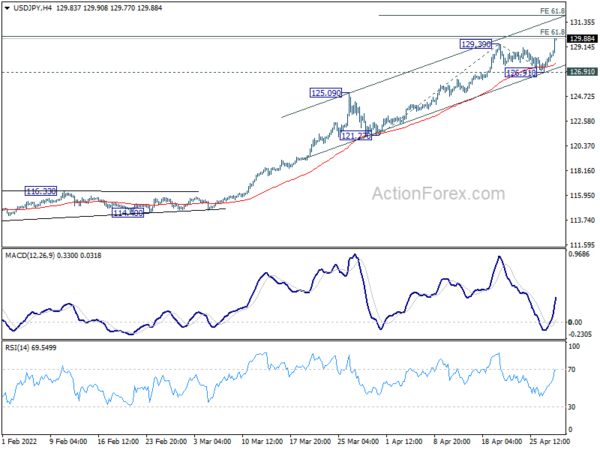 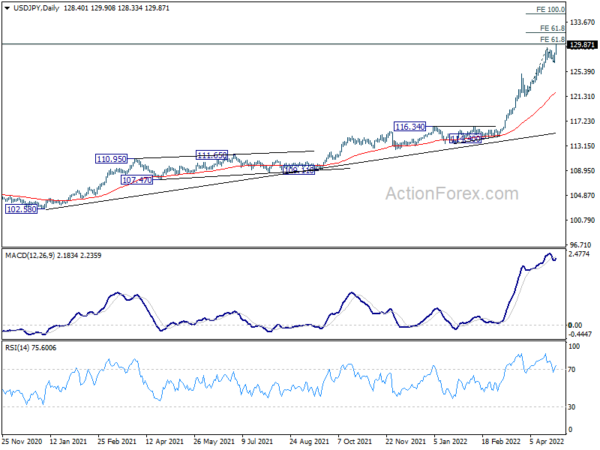