Dollar ended up as the strongest one last week, having the best week since 2015 and with Dollar index hitting a two-decade high. Though, the rally somewhat slowed towards the end of the week. It could be a result of month end flow or traders’ cautiousness ahead of Fed. But in any case, there is no sign of topping yet. Yen ended as the second strongest, with help from risk-off sentiment and consolidation in treasury yields.

On the other hand, risk aversion and concerns over China hammed Aussie and Kiwi. Euro was not too far away as Russian invasion continued and more sanctions are underway. Sterling and Swiss Franc were also poor performers while Canadian Dollar was mixed.

Dollar index hit the highest level since 2002, ahead of Fed hike

Dollar index surged to as high as 103.92 last week, hitting the highest level since 2002. But it failed to close above long term resistance at 103.82, and ended at 102.95 instead. The greenback is partly supported by expectations of aggressive rate hike by Fed., and partly by risk aversion. However, Dollar has apparently lost some momentum against Yen, and that somewhat capped the upside of DXY.

A 50bps increase in the federal funds rate on coming Wednesday, May 4, is a done deal. The question is whether Fed would deliver an even larger increase of 75bps in June, as currently priced in by the markets. Chair Jerome Powell is unlikely to be concrete in answer this question. Instead, as incoming data come through, in particular the non-farm payroll report this Friday, Fed officials would start to adjust their tune to shape the expectations for June. 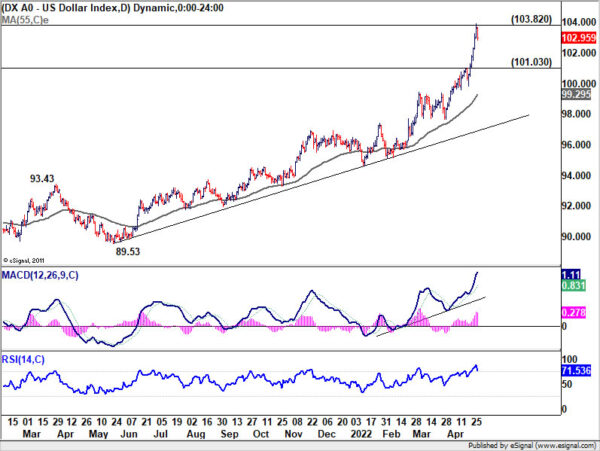 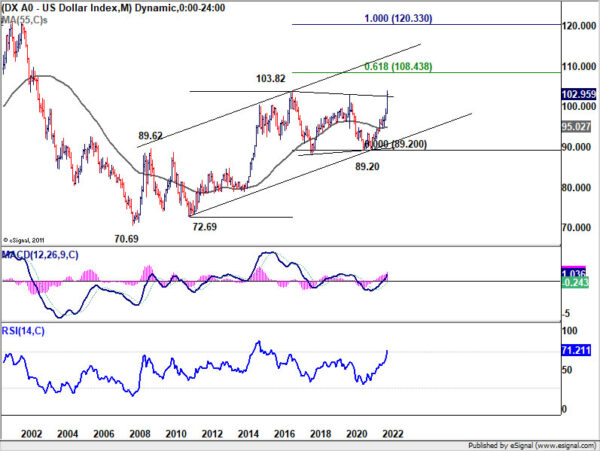 Yen was initially pressured after BoJ doubled down on its commitment to defend 0.25% cap on 10-year JGB yield. The central bank also maintained a dovish bias, pledging to ease without hesitation if needed. Yet, risk aversion gave Yen a lifeline towards the end of the week. That in turn capped USD/JPY’s rally and limited the greenback’s momentum. Based on near term bearish outlook in both NASDAQ and S&P 500, such pattern could continue for a while. 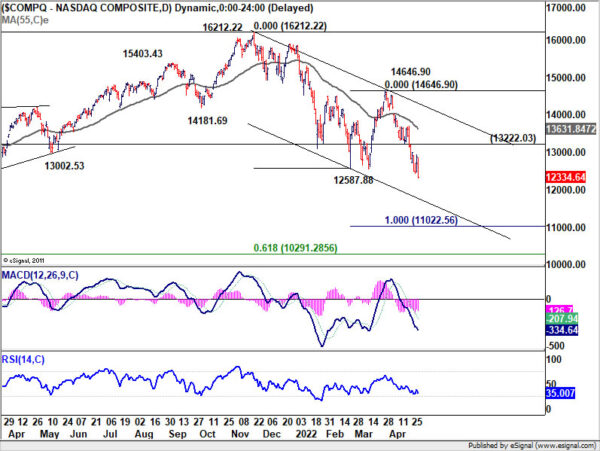 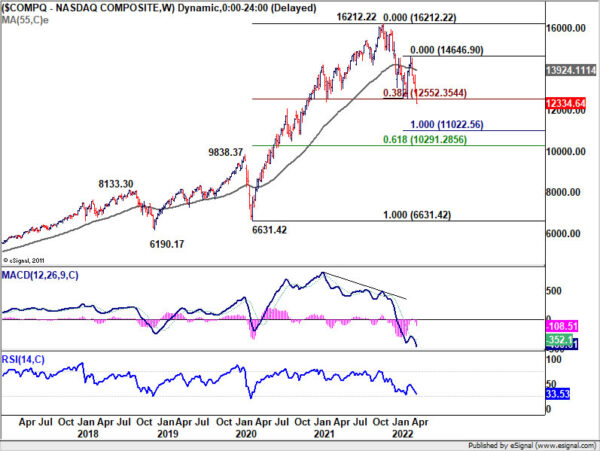 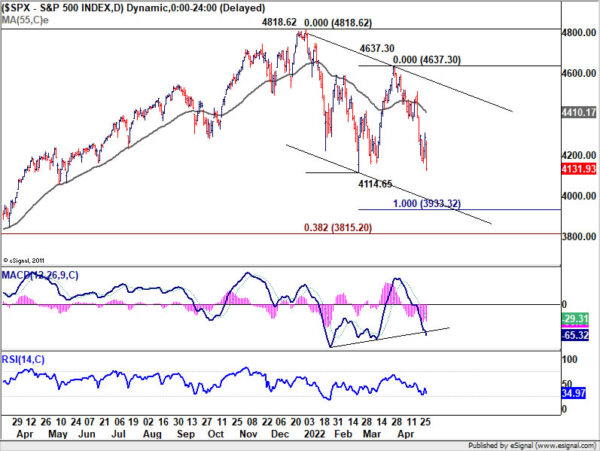 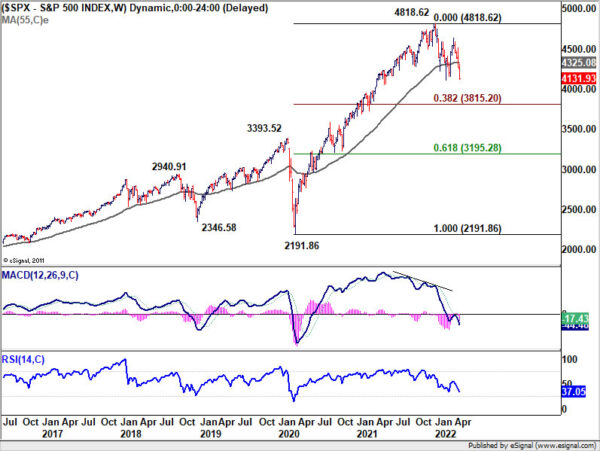 US 10-year yield in consolidation, staying bullish for 3% and above

The consolidations in US treasury yield also helped stabilize Yen. 10-year yield turned into consolidation after hitting 2.954. More sideway trading could be seen for the near term, but outlook will remain bullish as long as 2.646 support holds. The key hurdle is the trend defining long term resistance at 3.248 (2018 high), which is not expected to be taken out decisively on first attempt. TNX could continue to lose upside momentum on next rise, and starts to feel heavy above 3% handle. Any extended consolidation or correction in TNX would also help Yen recover. 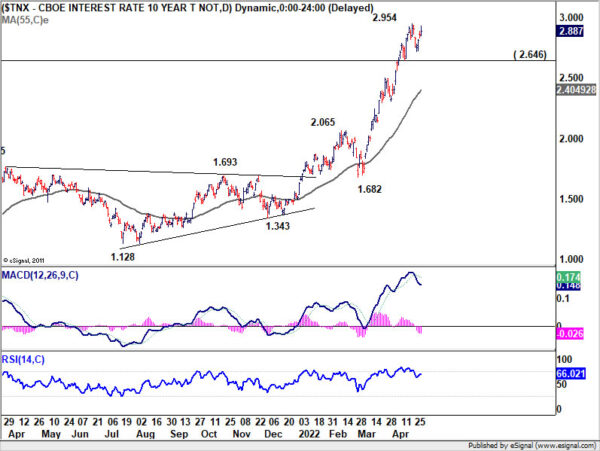 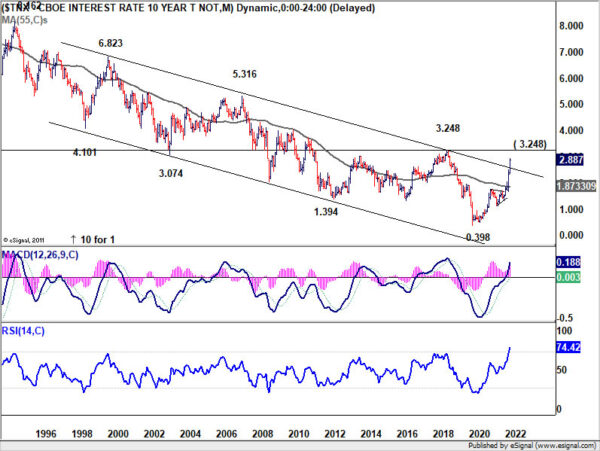 Australian Dollar was under some pressure even though RBA is now expected to pull ahead the first rate hike to the coming Tuesday, and deliver another one in June. The Aussie was weighed down by overall risk sentiment, concern over China’s lockdowns, and weakness in both Chinese stocks and Yuan.

AUD/JPY extended the corrective pattern from 95.37 last week, on the above developments. Outlook isn’t too bearish, nonetheless, as it’s just consolidating recent rally from 80.34. Deeper fall could be seen to 38.2% retracement of 80.34 to 95.73 at 89.85. But strong support should be seen there, which is close to 55 day EMA (now at 89.51) to bring rebound. However, firm break of 89.85 would be a hint of bigger turn in overall sentiment. 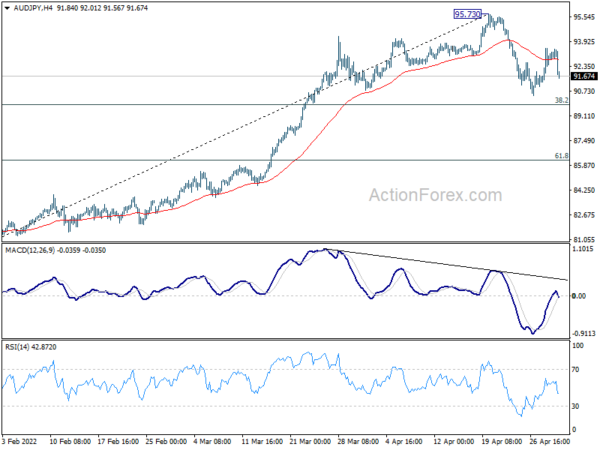 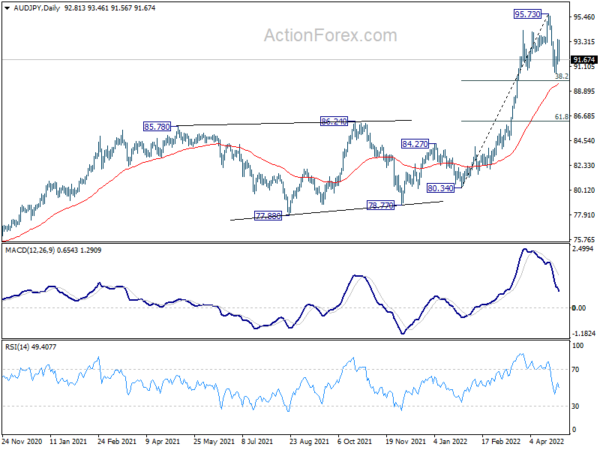 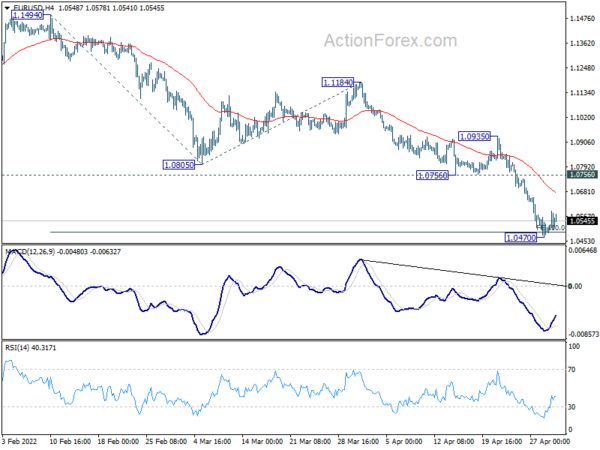 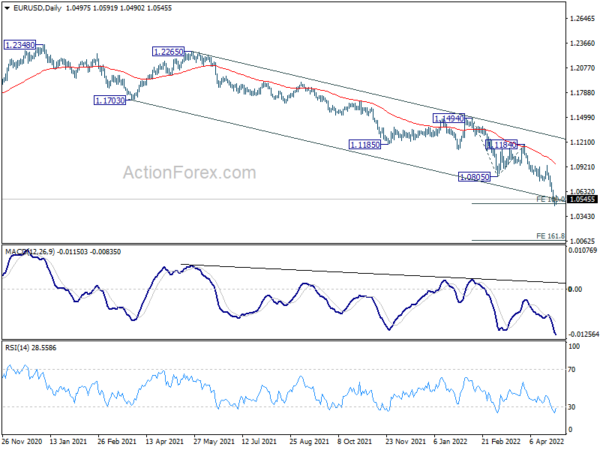 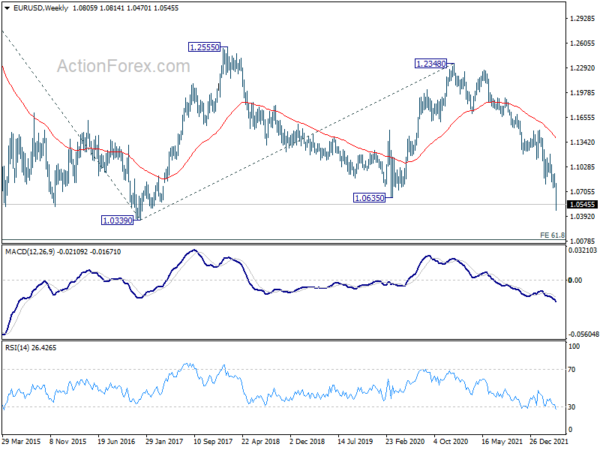 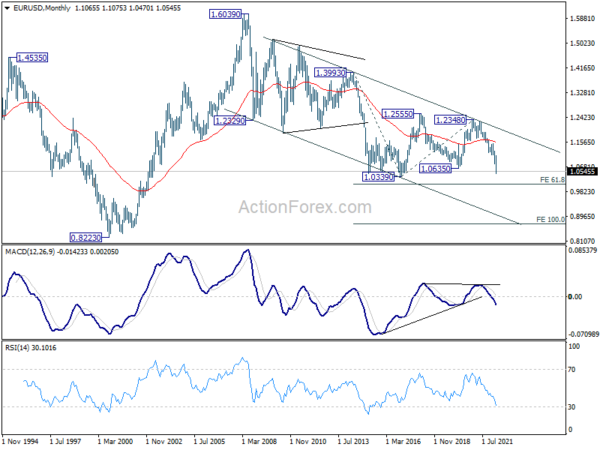