Dollar remains the firmer one today, in quiet markets, as traders are awaiting Fed’s rate hike, and forward guidance later in the week. Yen’s trading tone is so far positive, as risk markets lack buyers. Commodity currencies are weak together with Euro and Sterling. Aussie is the relatively steadier one as markets await tomorrow’s RBA hike. Canadian Dollar and also turning weak, as dragged down by falling oil price. But Kiwi is still the worst performer.

Technically, Dollar’s broad-based rally is making some progress. USD/CAD has taken out 1.2879 temporary top. USD/CHF also takes out 0.9758 temporary top too. Now, focus is on 1.0470 temporary low in EUR/USD and 131.24 temporary top in USD/JPY. Break of these two levels should confirm underlying strength of the greenback. 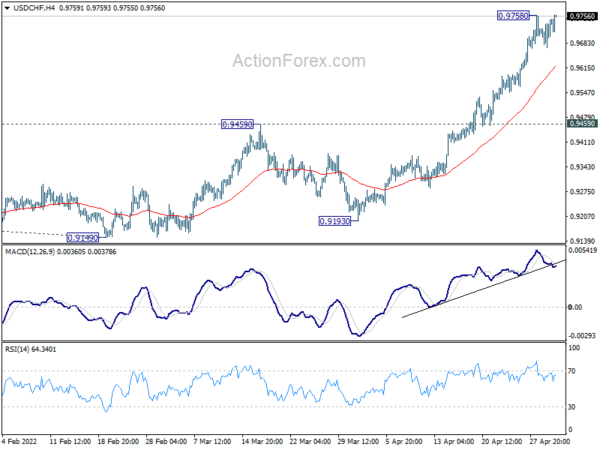 WTI crude oil heading back through 100 on China worries

Oil prices drop notably today on worries over China’s economy. Data released over the weekend showed PMIs hitting the lowest level since February 2020 due to lockdowns. The economy is on the verge of contraction in Q2 as situation is unlikely to improve any time soon. Meanwhile, Libya also temporary resume operation at a terminal, adding to global supply.

WTI should have finished the rebound form 95.87 and it’s now heading back through 100 handle, towards 95.87 support. But overall, it’s seen as developing another falling leg inside the medium term triangle corrective pattern that started back in 131.82. Downside should be contained by 93.47 support. Larger up trend is still expected to resume at a later stage. The bigger question is whether the final rally of the up trend would ended as a failure fifth that couldn’t even pass through 131.82 high. 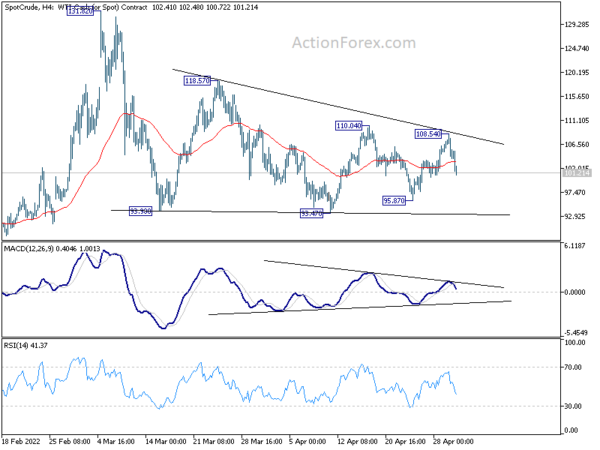 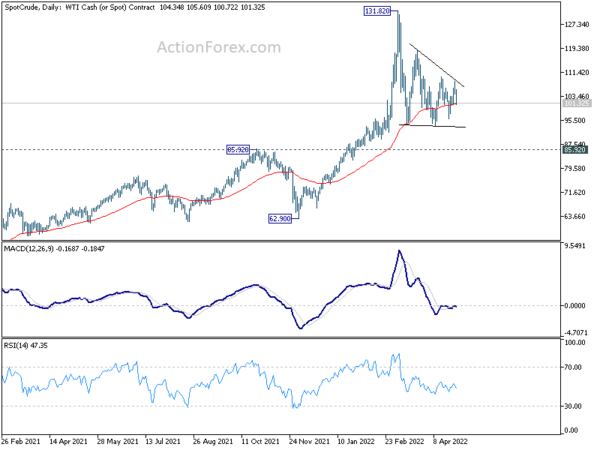 Eurozone PMI manufacturing finalized at 55.5, output came to a near standstill

Chris Williamson, Chief Business Economist at S&P Global said: “Manufacturing output came to a near standstill across the eurozone in April, with production merely edging higher at the slowest rate since June 2020. Companies not only reported that ongoing problems with component shortages were aggravated by the Ukraine war and new lockdowns in China, but that rising prices and growing uncertainty about the economic outlook were also hitting demand.”

France PMI Manufacturing was finalized at 55.7 in April, up from March’s 54.7. S&P Global said manufacturing output growth was constrained by war in Ukraine. There were reports of automotive sector weakness, while supply issues persisted. Output price inflation accelerated to series high.

Swiss SECO consumer climate dropped sharply from -4 to -27 in Q2, well below expectation of -15. That’s was the biggest decline since the onset of the pandemic, and the reading was below long-term average of -5. Looking at some details, the expected economic development index dropped from 21 to -31. Expected financial situation dropped from -3 to -25. Major purchases index dropped further from -23 to -31.

SECO said: “The survey from April shows a marked weakening of consumer sentiment. In particular, consumers’ outlook for the general economic situation has turned far more pessimistic. Households are feeling the strain as prices continue to rise. Meanwhile, the situation on the labour market is again being viewed as more positive. ”

Usamah Bhatti, Economist at S&P Global, said: “Domestic demand was a key driver of growth… but the reintroduction of lockdown restrictions in China hindered international demand. These measures coupled with the fallout from war in Ukraine continued to disrupt supply chains across the sector.

“Though still optimistic, Japanese goods producers were increasingly wary of the continued impact of price and supply pressures, and also the impact of the war and extended lockdowns in China. As a result, confidence dipped to the weakest since July 2020.”

Japan consumer confidence ticked up to 33.0 in Apr

USD/CAD’s rally from 1.2401 resumes by breaking through 1.2879 temporary top. Intraday bias is back on the upside for 1.3022 fibonacci level next. Decisive break there will carry larger bullish implications. In any case, outlook will stay cautiously bullish as long as 1.2717 support intact, in case of another retreat. 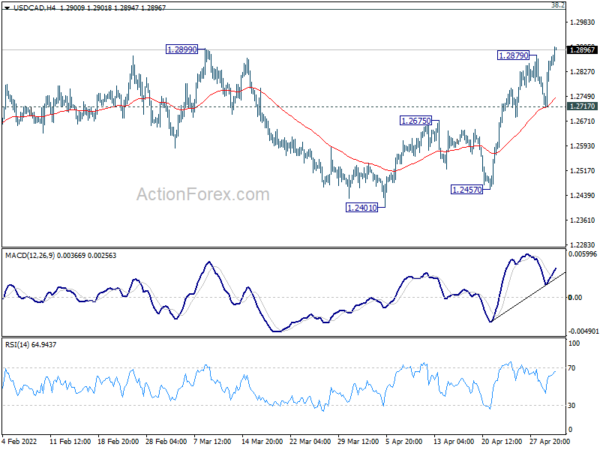 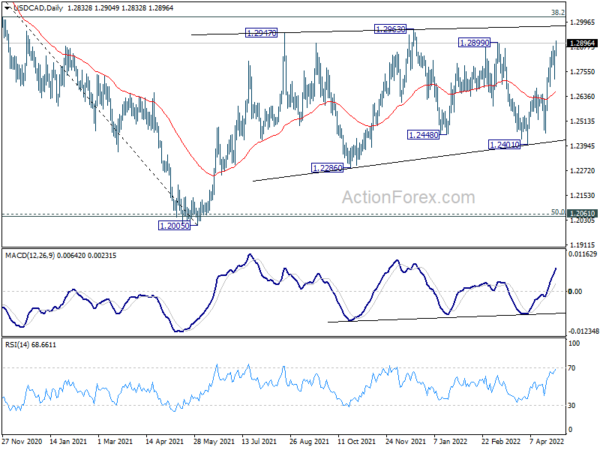