Dollar turns slightly softer in early US session even though non-farm payroll report came in slightly better than expected. Yen is also weak on rising benchmark global yields. On the other hand, Euro jumps broadly as supported by hawkish comments from ECB officials. As for the week, Aussie and Euro are now the strongest ones while Sterling and Swissy are the weakest.

Technically, EUR/CHF finally breaks through 1.0400 resistance today, after brief set back. Rebound from 0.9970 is resuming for 1.0610 structural resistance next. The development could help lift Euro against others. In particular, EUR/GBP is on track to 0.8697 medium term fibonacci level. 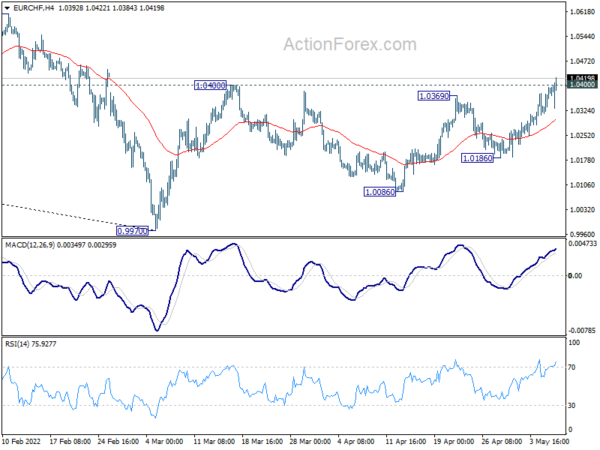 US non-farm payroll employment rose 428k in April, slightly above expectation of 400k. Total employment was still down by -1.2m, or -0.8%, from its pre-pandemic levels.

Unemployment rate was unchanged at 3.6%, matched expectations. Number of unemployed persons was essentially unchanged at 5.9m. The numbers compared to prepandemic levels of 3.5% and 5.7m respectively. Labor force participation rate dropped -0.2% to 62.2%.

ECB Rehn: We should move relatively quickly to zero

ECB Governing Council member Olli Rehn said today, “We are almost in between a rock and a hard place so that on one hand we have to ensure that the recovery will continue. On the other hand, we have to prevent higher inflation expectations being entrenched and being reflected in the labor market.”

“In other words, we have to avoid second-round effects. Therefore, in my view, we should move relatively quickly to zero and continue our gradual process of normalization of monetary policy as we have done,” he continued.

“Of course, all this on the condition that Russia’s war in Ukraine will not substantially escalate and intensify which could derail all the forecasts and the economic recovery.”

ECB Villeroy: Reasonable to have positive rates by year end

ECB Governing Council member Francois Villeroy de Galhau said, “the three conditions of our forward guidance on interest rates are, according to my personal judgment, fulfilled. Barring unforeseen new shocks, I would think it reasonable to have entered positive territory by the end of this year.”

But he’s vague on the timing of the first hike, as “while I wouldn’t preclude the next few Governing Council meetings, I would rather set a marker a bit further down the road.” He added the ECB’s push to normalize policy “will be guided by an active use of optionality and gradualism.”

On asset purchases, Villeroy said “seen from today the case for continuing to press the accelerator and adding further net purchases after June is not obvious.”

BoE Pill: We face risks on both sides of the economic outlook

BoE Chief Economist Huw Pill told CNBC today that “we face risks on both sides of the economic outlook.” Inflation is going up to 10% because of energy and international goods prices. At the same time, there was a risk of recession.

“It’s a tricky balance to seek in current difficult circumstances. And the arguments around where rates should be set in order to achieve that balance are quite finely balanced in themselves,” Pill added.

Asked about what would cause the BOE to pause tightening, Pill said MPC would want to see more evidence inflation expectations and wage and price setting and momentum in economy more consistent with target. He added, “if we don’t see that we will need to act further.”

UK PMI Construction dropped from 59.1 to 58.2 in April, above expectation of 58.0. S&P Global said new work had the weakest rise since December 2021. Total construction output expanded at slower pace. Growth projections eased to lowest since September 2020.

Tim Moore, Economics Director at S&P Global said: “The construction sector is moving towards a more subdued recovery phase as sharply rising energy and raw material costs hit client budgets. House building saw the greatest loss of momentum in April, with the latest expansion in activity the weakest since September 2021. Commercial and civil engineering work were the most resilient segments, supported by COVID-19 recovery spending and major infrastructure projects respectively.”

In the Statement on Monetary Policy, RBA reiterated that a further lift in interest rates is required over the period ahead. Also, the Board will continue to closely monitor the incoming information and evolving balance of risks as it assesses the timing and extent of future interest rate increases

In the new economic projections:

Also from Australia, AiG Performance of Services Index rose from 56.2 to 57.8 in April. 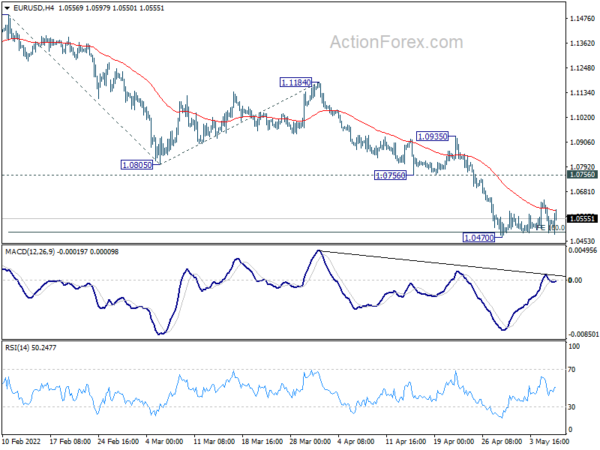 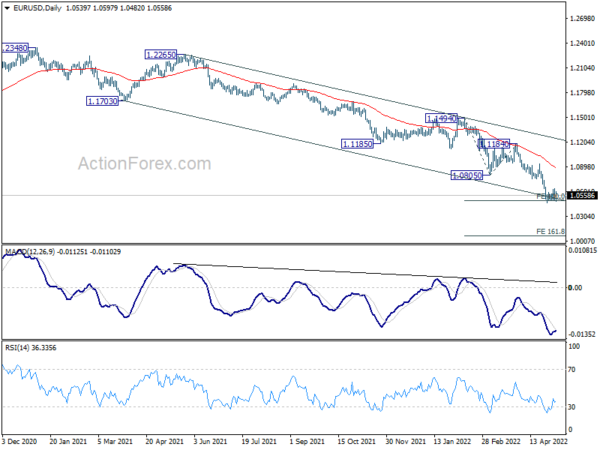