Dollar Recovers in Tight Range, Sterling Down after CPI

Dollar and Yen are recovering mildly today but overall major pairs and crosses are stuck in very tight range. European majors are the weaker ones, with Sterling having a lower handle. Commodity currencies are mixed. Trading is also quiet in other markets with Gold continuing to hover slightly above 1800 handle. WTI crude oil is gyrating in tight range below 115. Bitcoin is flip-flopping around 30k. A surprise could be found in US 10-year yield ahead, which might reclaim 3% handle. That could help give Dollar a lift against Yen.

Technically, it looks like Sterling has already failed near term resistance level, after today’s CPI data provided no fuel for further rally. GBP/USD retreated well ahead of 1.2637 resistance, and GBP/JPY ahead of 161.16 minor resistance. EUR/GBP also recovered ahead of 0.8365 support. There is slightly more prospect of more downside in the pound. 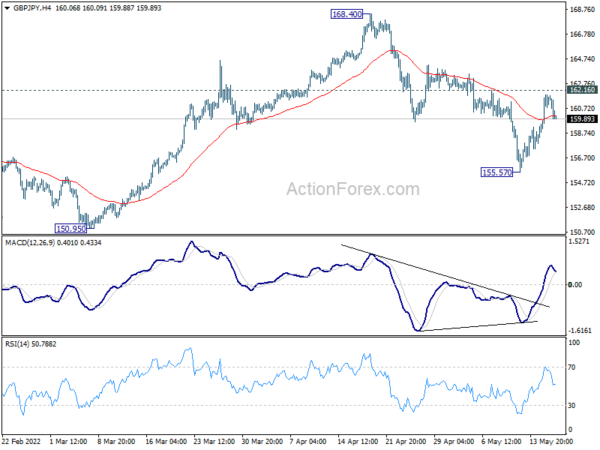 Canada CPI ticked up to 6.8% yoy in Apr, driven by food and shelter prices

Canada CPI ticked up further to 6.8% yoy in April, up from March’s 6.7% yoy, above expectation of 6.7% yoy. CPI ex-gasoline accelerated to 5.8%, up from 5.5% yoy, fastest since the series was introduced in 1999. Statics Canada added that the year-over-year increase in April was largely driven by food and shelter prices. Gas prices increased at a slower pace.

ECB de Cos: Further rate hikes could be made in coming quarters

ECB Governing Council member Pablo Hernandez de Cos said today, “in the coming quarters, further (rate) increases could be made to reach levels in line with the natural rate of interest if the medium-term inflation outlook remains around our target.”

But de Cos also emphasized that the process of policy normalization would be gradual. “For this gradual approach to be adopted, it is essential that inflation expectations remain anchored and that no second-round and indirect effects of a magnitude that could jeopardise this anchoring materialise,” he said.

Another Governing Council member Olli Rehn said, “It seems necessary that in our policy rates we move relatively quickly out of negative territory and continue our gradual process of monetary policy normalization.”

Headline CPI was another record high since the National Statistics series began in 1997. It’s also the highest record rate in the constructed historical series which began in 1989.

Based on the recently published modelled consumer price inflation data by the ONS, CPI was last higher sometime around 1982, where estimates range between approximately 6.5 % in December to nearly 11% in January.

In response to the release, Chancellor of the Exchequer Rishi Sunak said: “Today’s inflation numbers are driven by the energy price cap rise in April, which in turn is driven by higher global energy prices.

“We cannot protect people completely from these global challenges but are providing significant support where we can, and stand ready to take further action.”

Economy minister Daishiro Yamagiwa said the economy has not returned to pre-pandemic levels but that further downside would likely be limited. He also expected the economy to pick up even though uncertainty remains due to Ukraine situation. Also, China’s zero-covid policy is having a significant impact on supply chains.

Australia Westpac-MI leading index dropped from 1.69% to 0.88% in April. Westpac recently revised down growth forecast for 2022 from 5.5% to 4.5%, reflecting the sharp increase in cost of living, and an earlier and more rapid RBA tightening policy.

As for RBA meeting on June 7, Westpac expects the central bank to hike by a further 40bps to 0.75%, even though most analysts favored a cautious move of 25bps. Westpac said, “It is also much more prudent to front load the increases where at a stage in the cycle when rates are clearly below what might be considered a ‘neutral’ level. 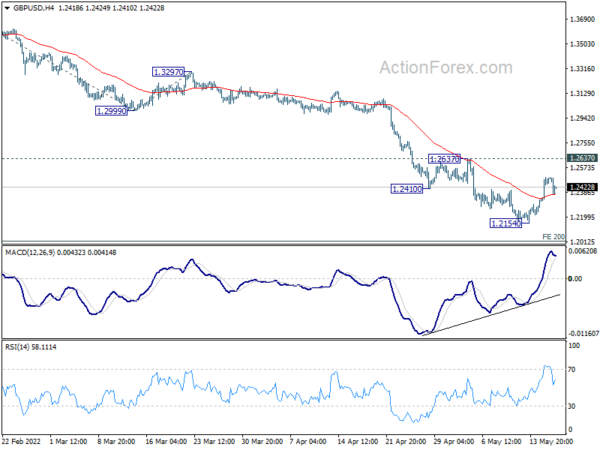 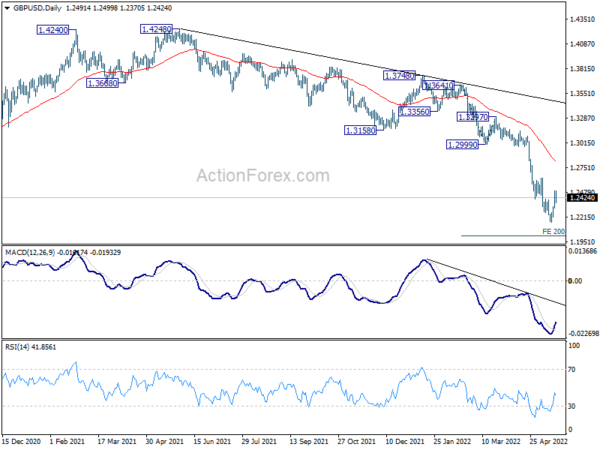