Markets are generally in risk-on mode in Asian session today, with rallies in major indexes, oil prices and cryptos. Dollar is extending recent correction and would likely continue further. Yen and Swiss Franc are the next weakest. On the other hand, Australian Dollar is leading New Zealand and Canadian Dollar higher. Euro and Sterling are mixed for now. Overall, it’s a picture of positive market sentiments.

Technically, 31407 resistance in bitcoin would be a focus in the early part of the week. Firm break there will firstly resume the rebound from 25083 towards 55 day EMA (now at 34358). More importantly, that would be an early sign of larger trend reversal and open up the prospect of further rally to 38.2% retracement of 68986 to 25083 at 41853. If that happens, it would be a strong sign of return of strong risk appetite, which would be unfavorable to Dollar. 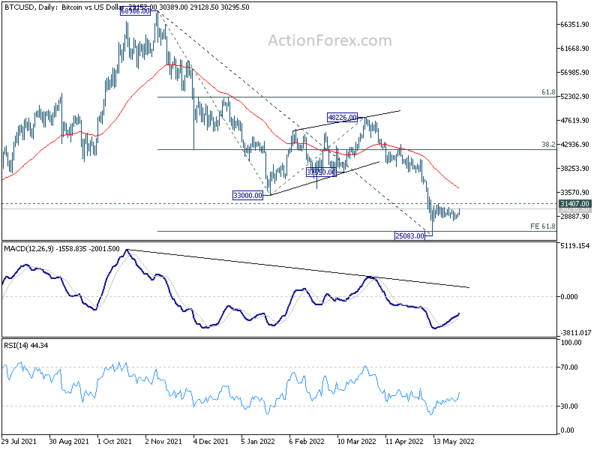 “75 wasn’t seriously on the table because we are pretty convinced that we can get to where we need to get with 50-point increments,” he said. Also, the central bank was “signaling there’s probably some more 50 points coming over the next little while.”

On the economy, Conway said “it’s difficult to engineer a soft landing — typically a significant reduction in inflation is accompanied by negative economic growth — but there’s reasons to believe New Zealand is well placed to pull it off this time around.”

“The labor market is strong and that’s the underlying reason why the New Zealand economy is well placed to weather the storm,” he added.

BoJ Kuroda: Yen’s rapid weakening not because of monetary policy

BoJ Governor Haruhiko Kuroda told the parliament today, “I don’t think the BoJ’s monetary policy was the factor behind a rapid yen weakening. The recent yen weakening may have been driven by an abnormal situation where oil prices topped $130 per barrel.”

He also said that the rapid depreciation of Yen was “undesirable”. But the situation was improving with Dollar easing back to around 127 Yen.

BoC is widely expected to raise interest rate by another 50bps to 1.50% this week. Governor Tiff Macklem had recently noted that interest rates may need to go above the neutral range, estimated to be between 2% and 3%. Thus BoC should indicate that more tightening is still on the way. But Macklem would probably wait at least until July’s monetary policy report before talking about how high rates would top.

In terms of central bank activities, Fed will also publish Beige Book anecdote report. On the data front, US ISMs and non-farm payrolls will be the biggest events of the week. Others include Eurozone CPI flash, Canada GDP, Swiss GDP, China PMIs. Here are some highlights for the week:

Intraday bias in AUD/USD remains on the upside, as rise from is extending. Next target is 0.7265 resistance. Firm break there will raise the chance of larger trend reversal and target 0.7760 structural resistance next. On the downside, break of 0.7034 minor support will turn bias back to the downside for retesting 0.6828 low instead. 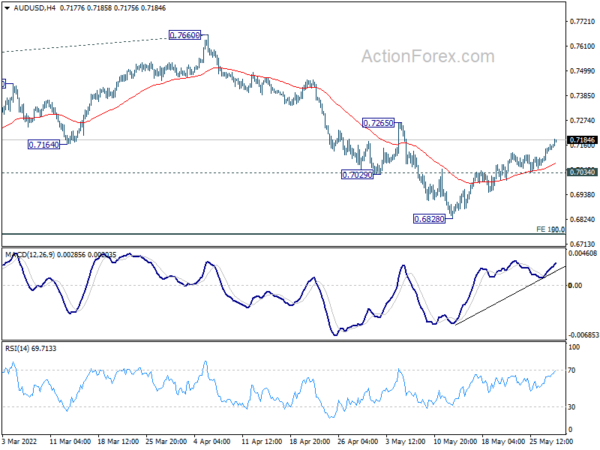 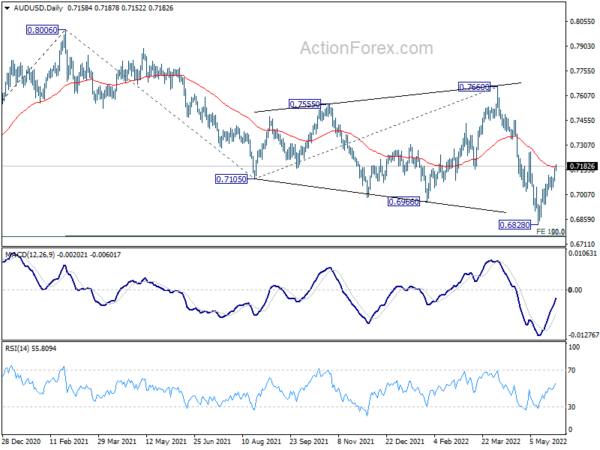