Dollar jumps broadly in early US session after stronger than expected headline non-farm payroll numbers. For now, the greenback is still behind Canadian and Australian Dollar in the weekly race, however. On the other hand, Yen’s selloff is extending again, as pressured by strong rally in global benchmark treasury yields. European majors are mixed, with Euro being slightly stronger.

Technically, the focus for the rest of the session would be on Dollar against European majors. To be specific, levels to watch include 1.0626 minor support in EUR/USD, 12.2457 minor support in GBP/USD, and 0.9763 minor resistance in USD/CHF. Break of these levels could set the base for more Dollar rally next week.

US NFP grew 390k in May, unemployment rate unchanged at 3.6%

US non-farm payroll employment grew 390k in May, above expectation of 325k. Prior month’s growth was also revised up from 428k to 436k. Overall non-farm employment was still down by -822k, or -0.5% from its prepandemic level.

Unemployment rate was unchanged at 3.6% for the third month in a row, above expectation of 3.5%. No of unemployed was essentially unchanged at 6.0m. Participation rate rose 0.1% to 62.3%.

Average hourly earnings rose only 0.3% mom, below expectation of 0.4% mom.

Eurozone retail sales dropped -1.3% mom in Apr, much worse than expectation of 0.3% mom rise. Volume of retail trade decreased by -2.6% for food, drinks and tobacco and by -0.7% for non-food products, while it increased by 1.9% for automotive fuels.

Chris Williamson, Chief Business Economist at S&P Global Market Intelligence said: “Strong demand for services helped sustain a robust pace of economic growth in May, suggesting the eurozone is expanding an underlying rate equivalent to GDP growth of just over 0.5%. However, risks appear to be skewed to the downside for the coming months…

“The near-term fate of the eurozone economy will therefore depend on the extent to which a fading tailwind of pent-up demand can offset the headwinds of geopolitical uncertainty amid the Ukraine war, supply chain disruptions and the rising cost of living, the latter likely exacerbated by tightening monetary conditions.” 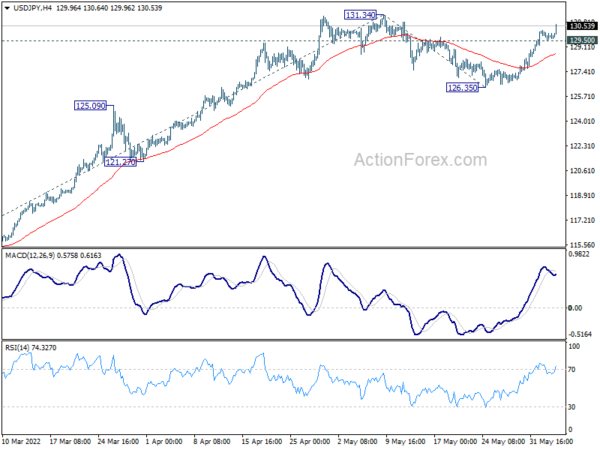 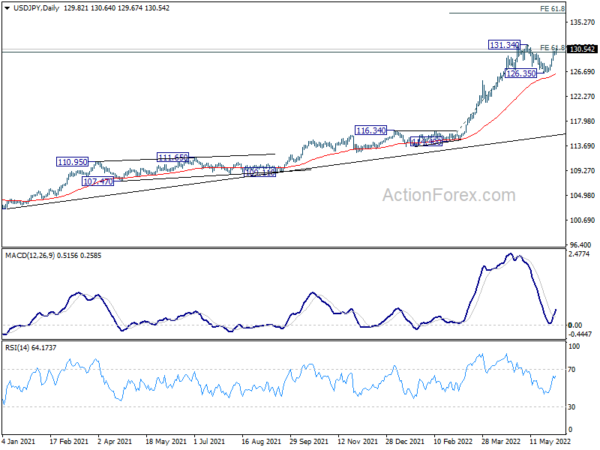