Dollar Staying as the Strongest, But Canadian Resilient Too

Dollar is staying as the strongest major currency in the market for now. Yen and Swiss Franc are not performing too badly, as supported by mild risk-off sentiment. But Canadian Dollar is also resilient, awaiting BoC’s decision on whether to deliver a jumbo rate hike. Aussie and Euro are currently the worst, while Sterling is also week. These three have already broken through recent lows against the greenback.

Technically, CAD/JPY is worth some attention for the coming days. Price actions fro m107.19 are clearly corrective while the cross is also supported comfortably above 55 day EMA. It has the better potential to follow USD/JPY for an upside breakout. Break of 107.19 will extend the larger up trend towards 110 handle next. 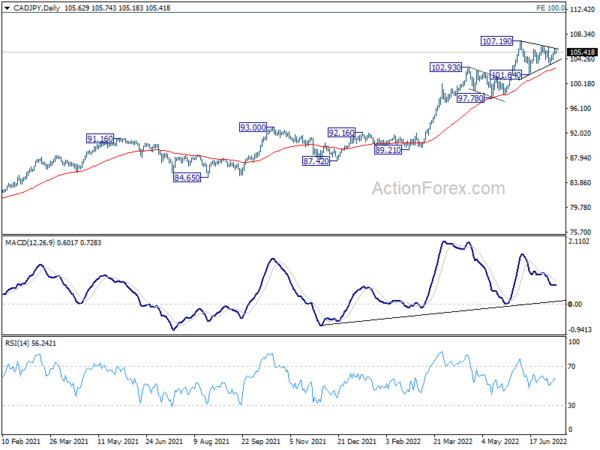 Atlanta Fed president Raphael Bostic said yesterday, “the data that came in the last several months really pointed to a need for us to get closer to that neutral stance faster,”

“I’m confident that the economy will be able to withstand this next move. I would support a 75 basis point” rate hike at the July FOMC meeting, he added.

Beyond July, the decisions will depend on incoming economic data. “If demand comes down much faster than we expected or supply comes back, I will be comfortable pulling off” further rate increases, Bostic said.

Separately, St. Louis Federal Reserve president James Bullard said, “now we have lots of inflation, but the question is, can we get back to 2% without disrupting the economy? I think we can.”

Australia Westpac Consumer Sentiment Index dropped from 86.4 to to 83.8 in July. The confidence has been falling every month this year, and it’s now -19.7% below December’s level.

Westpac said that both level and pace of deterioration are “comparable to previous major shocks”. It added that rate fears were intensifying, with 73% polled expecting rates to rise more than 1%.

As for RBA policy, Westpac expects another 50bps rate hike on August 2, taking interest rate to 1.85%. That would be near to Westpac’s assessed “neutral zone” of 1.5-2.0%. It expects RBA to adopt a “more cautious approach” once policy moved to “neutral”, and pause the tightening first after August’s hike.

Australia NAB business confidence dropped to 1, but conditions held up

“Confidence sank below average in June as inflation and interest rate hikes clouded the outlook,” said NAB Group Chief Economist Alan Oster. “Confidence in the retail sector took a significant hit, falling more than 20pts to be well into negative territory, reflecting concerns about the outlook for household spending.”

“While confidence fell, business conditions held up in June,” said Oster. “Conditions remain strong across the states and in most industries. Construction continues to be the only real outlier with building costs weighing, despite a healthy pipeline of work in the sector.”

Germany ZEW economic sentiment will be the main focus for the rest of the day.

GBP/USD’s down trend resumes after brief consolidations. Intraday bias is back on the downside for 100% projection of 1.2666 to 1.1932 from 1.2405 at 1.1671. Decisive break there will target a test on 1.1409 long term support. On the upside, above 1.2055 minor resistance will now indicate short term bottoming, and turn bias to the upside for stronger rebound. 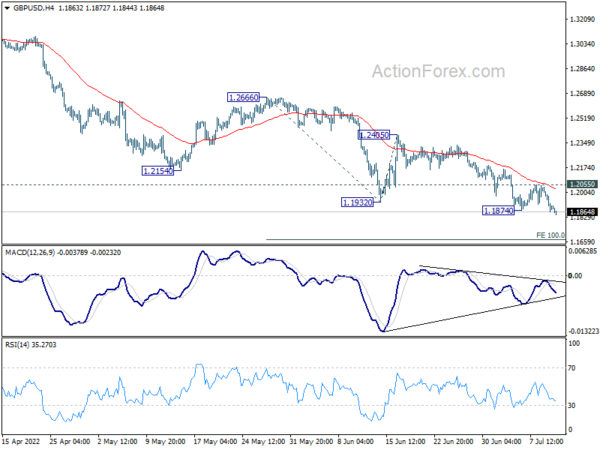 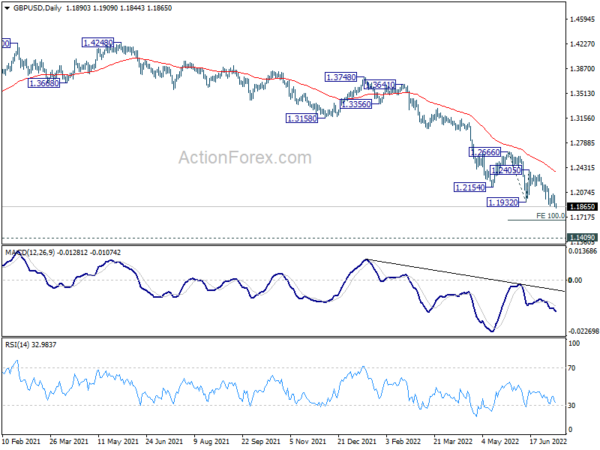