Dollar rises in early US session after data shows that headline consumer inflation accelerated once again in June, to the highest level since 1981. Yen is currently the worst performing one on rise in US and European benchmark yields. But there is prospect for recovery in Yen, except versus Dollar, if risk off sentiment intensifies. Kiwi is also on the softer side despite RBNZ rate hike earlier today. Euro is under performing Sterling and Swiss Franc. Canadian Dollar is resilient for now and the next move will depend on BoC rate decision.

UK GDP grew 0.5% mom in May, much better than expectations

After data showing 0.5% mom GDP growth in UK, NIESR now forecasts 0.2% mom growth in June. For whole of Q2, growth would then be 0.2%. It still forecast a contraction of -0.1% in GDP Q3, with growth likely to slow further as inflation drags on consumer demand.

Rory Macqueen, Principal Economist, NIESR: “If April activity was more encouraging than the headline figure suggested – with strong consumer-facing services dragged down by the reduction in vaccinations – the opposite may be true of May. Headline growth of 0.5 per cent owed much to rising GP visits, while sectors like hospitality, retail and the arts all contracted, suggesting that rising prices may have eaten into discretionary household consumption.

” More encouragingly, manufacturing had its joint strongest month since November 2020, and construction recorded a seventh consecutive month of expansion. With plenty of room for revisions, it looks like touch and go as to whether the UK economy entered recession in the second quarter.”

RBNZ raised Official Cash Rate by 50bps to 2.50% as widely expected. The central bank also indicated that it will follow the projected path to raise interest to nearing 3.5% by the end of 2022, and then around 4% in mid-2023.

“The Committee is comfortable that the projected path of the OCR outlined in the recent May Monetary Policy Statement remains broadly consistent with achieving its primary inflation and employment objectives – without causing unnecessary instability in output, interest rates and the exchange rate,” RBNZ said in the statement.

Also, as noted in the summary records of meeting, “The Committee agreed to maintain its approach of briskly lifting the OCR until it is confident that monetary conditions are sufficient to constrain inflation expectations and bring consumer price inflation to within the target range.” 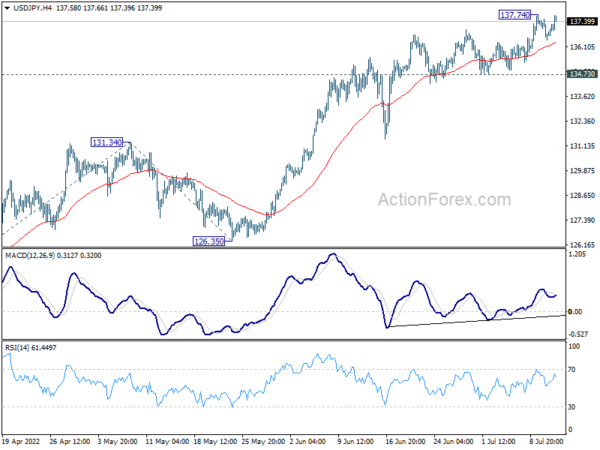 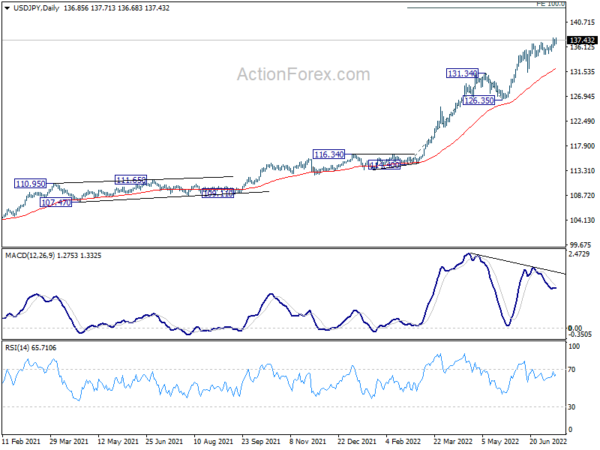