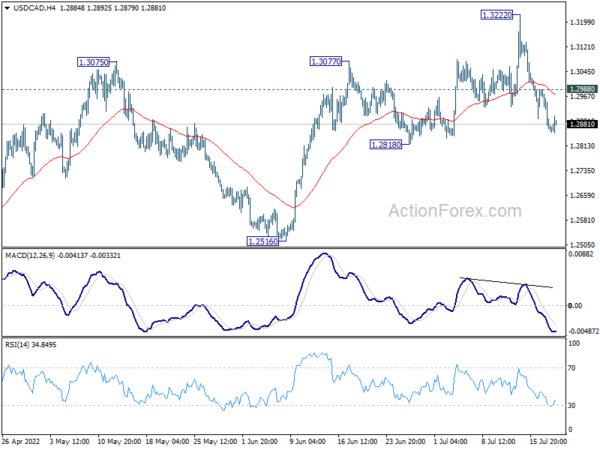 Canadian Dollar softens mildly in early US session after consumer inflation data. While CPI hit another near four-decade high, the reading was far below market expectations. On the other hand, New Zealand and Australian Dollar remains generally firm. Dollar is recovering slightly but stays as the worst performer for the week so far, as it’s near term correction. Overall all trading is relatively subdued and could wait until tomorrow’s ECB rate decision to revive some volatility.

Technically, Euro is losing some upside momentum ahead of Dollar, Yen and Sterling. It’s also looking vulnerable against Aussie. Break of 1.4759 support in EUR/AUD could prompt deeper selloff towards 1.4318 low. In this case, EUR/USD and EUR/GBP could also be dragged back to 0.9951 and 0.8401 support respectively.

Canada CPI accelerated from 7.7% yoy to 8.1% yoy in June, missing expectation of 8.8% yoy. Excluding gasoline, CPI accelerated from 6.3% yoy to 6.5% yoy. That’s still the highest level since January 1983. Statistics Canada said the acceleration was mainly due to higher prices for gasoline, however, price increases remained broad-based with seven of eight major components rising by 3% or more.

RBA Lowe: Further increase in rates required over the month ahead

RBA Governor Philip Lowe said in a speech that the robust post-COVID recovery is “now behind us” given that inflation is high and labor market is very tight. RBA thus have withdrawn some emergency insurance and raised cash rate by 125bps over the past three meetings to 1.35%.

RBA “expects that further increase will be required over the months ahead”, to “help establish a more sustainable balance between demand and supply in the Australian economy.

Australia Westpac leading index dropped from 0.56% to 0.40% in June, indicating economic slowdown later in the year, but momentum is still above trend in the near term.

Westpac currently expects growth to slow from 4% in 2022 to 2% in 2023, but that is highly dependent on the profile of RBA’s tightening cycle.

Westpac expects RBA to opt for a fourth successive rate hike on August 2, and a third success time by 50bps. The current cycle is the first time cash rate has been lifted by 50bps or higher since 1990. 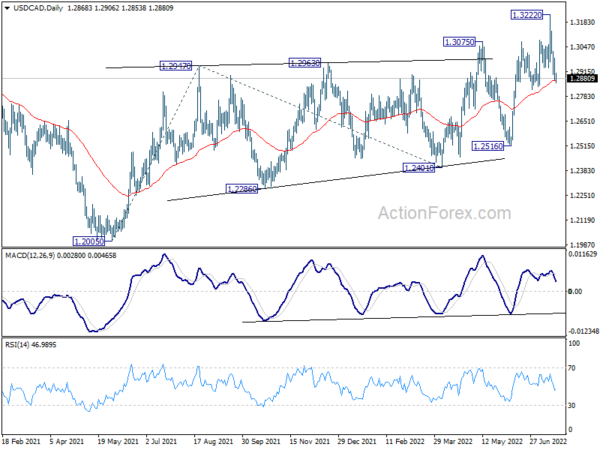