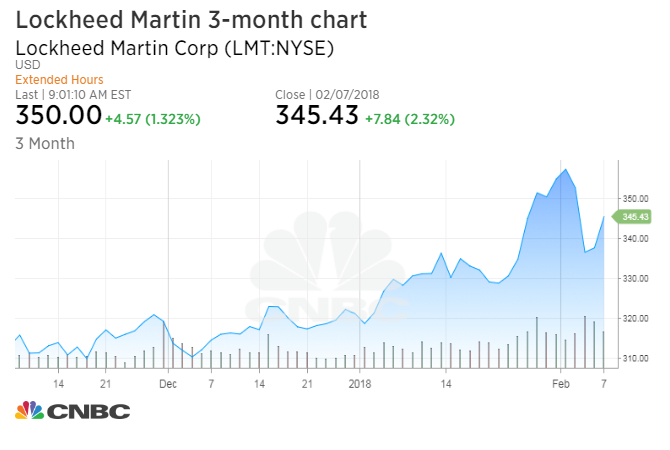 The deal proposed in the Senate would raise spending caps by about $300 billion over two years and bump the limit on military spending by $80 billion in the current fiscal year and $85 billion in the next year.

“The fiscal year 2018 all-in national defense budget will have a big step up and then a modest lift in fiscal year 2019,” wrote Cowen’s Roman Schweizer on Thursday. “We think this deal more than meets investors’ expectations for fiscal year 2018 but the details will matter as appropriators get to conferencing respective House-Senate positions on major programs.”

Defense stocks have climbed as Congress inched closer to a spending agreement, with President Donald Trump insistent that any bill includes more funding for the armed forces.

Raytheon — maker of the famed Tomahawk Missile — has easily outperformed the market over the past year, with the company’s stock up 38 percent versus the S&P 500’s 17 percent climb. Of note, the stock is up 9 percent in 2018 against the S&P’s 0.3 percent.

“We continue to see strong congressional backing for missile defense, cyber and other areas where Raytheon has a leadership position,” Kennedy said at the time. “The demand signals we see in our key growth areas, combined with the implementation of tax reform making us more globally competitive, creates a positive environment for continued business.”

Other defense companies such as Lockheed Martin and General Dynamics — which manufactures everything from tanks to nuclear-powered submarines — have also benefited amid talks of augmented military spend. Those stocks are up 7.6 percent and 5.7 percent respectively in 2018 alone.

Lockheed Martin stock fell 3.2 percent Thursday following a 2.3 percent pop the prior day as news of the deal came out.

But Cowen’s Schweizer isn’t the only one who sees an opportunity in aerospace and defense.

“When the defense contractors get slammed by a big sell-off, they should be right at the top, No. 1, of your shopping list because the things people are worried about — like the Fed possibly getting too aggressive — matter a lot less to the defense industry than, say, to the industrials,” explained CNBC’s Jim Cramer on Wednesday.