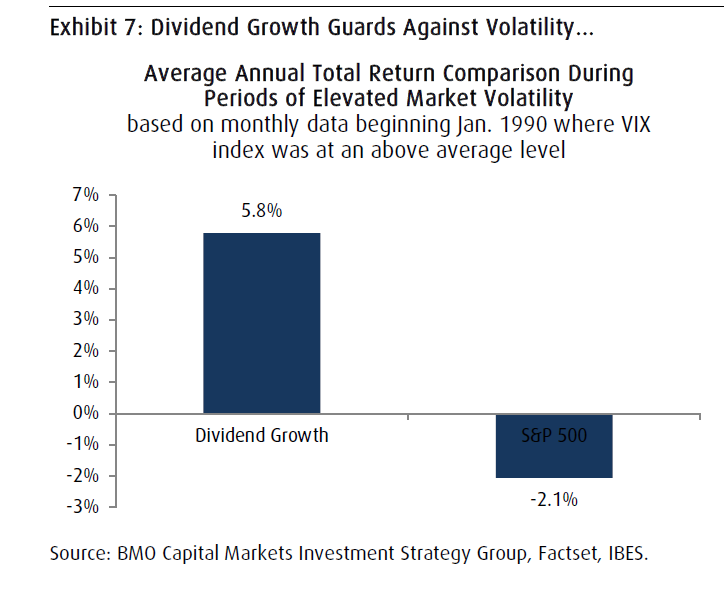 After a year of relative calm, volatility is back.

Stocks are recovering from last week’s correction but while markets reconcile with higher rates and rising inflation, BMO Capital markets says it has a strategy to help you sleep at night.

Stocks that consistently grow their dividend, including Johnson & Johnson, Morgan Stanley and Microsoft, should outperform the S&P 500 and turbulent environment even as higher rates threaten the attractiveness of their payout, according to BMO chief investment strategist Brian Belski.

“Unlike dividend-yield only strategies, which are typically a collection of defense stocks, dividend growth stocks typically contain broad representation from cyclical areas,” Belski wrote in a note to clients Thursday. “Our advice is to relax and take a step back from the noise.”

The noise Belski mentioned was especially loud during the recent market corrections and spike in volatility. Last Thursday, the major indexes closed 10 percent below record highs set Jan. 26. The VIX, Wall Street’s “fear index,” came back strong last week after a year of relative calm. In its nine previous sessions, the S&P 500 has logged seven moves greater than 1 percent. The broad index posted just eight 1 percent moves during all of 2017.

During similar swings, BMO said dividend-growth strategies have performed especially well. The firm looked at all monthly periods where the VIX was at an above-average level, and found that dividend-growth stocks gained an average annualized total return of 5.8 percent, compared with a loss of 2.1 percent in the S&P 500.

The strategy still works in stronger markets, BMO said. Dividend-growth stocks returned an average of 27.2 percent in months when the S&P gained 10 percent or more, according to the research.

One key factor in the sell-off last week was a jump in interest rates, which typically dampen the appeal of dividend stocks. This week, Wednesday’s surprise increase in inflation added to the possibility of another Fed rate hike. Core CPI notched its biggest monthly rise since 2005, coming in at 0.349 percent month over month.

The yield on the 10-year U.S. Treasury hit a four-year high of 2.944 percent Thursday, above the levels that sparked the market sell-off. The 2-year Treasury yield jumped to 2.213 percent Thursday, the highest level since September 2008. Yields move opposite of prices.

While BMO said its work shows nothing wrong with the fundamental state of stocks or the economy and there’s nothing “to suggest trouble on the horizon,” more price swings are on the way.

“This is the way a healthy stock market should work,” Belski wrote. “We are simply viewing this as a long overdue and needed pullback.”