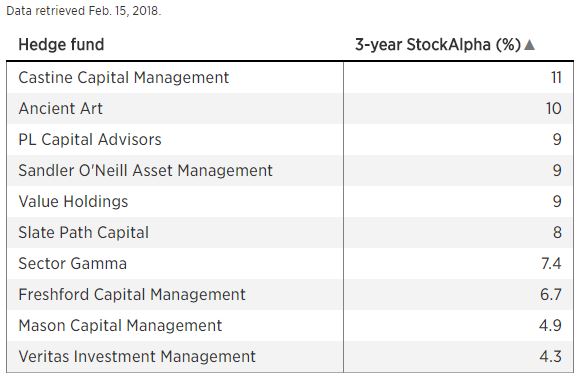 The top hedge fund stock pickers in the market bought some media, health-care and gaming stocks in the fourth quarter.

CNBC used data from hedge fund tracking firm Symmetric.io to find the top 10 managers and their biggest bets, according to recent filings. Hedge funds report their holdings in quarterly filings to the U.S. Securities and Exchange Commission that are released 45 days after the end of each quarter. Positions may have changed since.

Filings for the quarter ended in December were due Wednesday. Symmetric.io graded the stock-picking ability of more than 1,000 hedge funds in its database with a proprietary indicator called StockAlpha. It is derived by comparing the performance of equities in the fund to that of a sector ETF.

Slate Path Capital sold just over half its stake in Twitter, but its holding of the social media stock remains the third largest by size among the biggest stock investments across the 10 hedge funds.

Mason also made the greatest additions to its investments in the fourth quarter, with purchases of NXP Semiconductors, Caesars Entertainment and BHP Billiton.

Disclosure: Comcast is the owner of NBCUniversal, parent company of CNBC and CNBC.com.