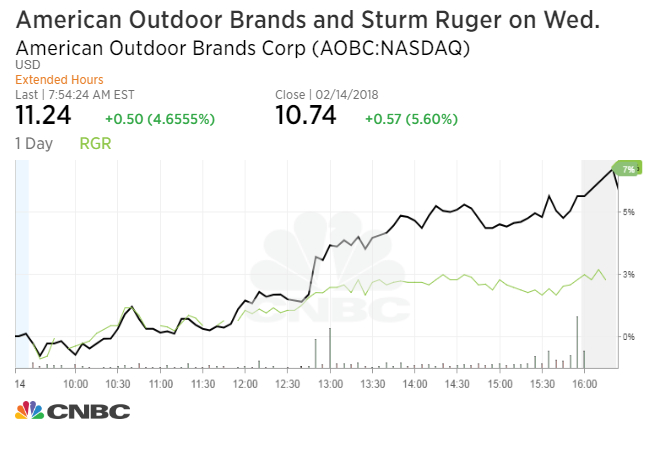 The company’s stock rose 1.2 percent and rose as much as 4.5 percent. Sturm Ruger briefly gained 2.8 percent before closing 0.2 percent lower.

Stock prices of gunmakers often rise after mass shootings on the theory that people will stockpile weapons in anticipation of tougher gun-control laws.

Rep. Eliot Engel, D-N.Y., said: “Another terrible school shooting, this time in Florida. At least 18 other school shootings have already happened this year. My heart breaks for those children and their parents. How many more victims until we decide gun violence is a national problem?”

Rep. Lloyd Doggett, D-Texas, also tweeted: “Another day, another shooting, indeed, multiple shootings today, while Congress sits in the grip of the NRA, incapable of making the slightest gesture toward reasonable gun safety.”

However, new gun-control laws are unlikely to be passed anytime soon. Both the Senate and the House are controlled by the Republican Party, and many of their members receive contributions from the National Rifle Association, which heavily opposes gun regulation.

My prayers and condolences to the families of the victims of the terrible Florida shooting. No child, teacher or anyone else should ever feel unsafe in an American school.