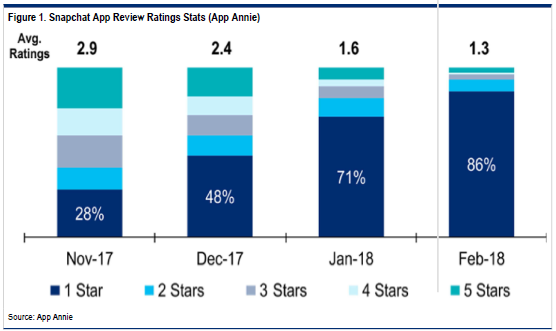 Snapchat users are livid over the app’s recent redesign, prompting a barrage of criticism on social media. Wall Street is taking notice and growing concerned over the company’s user numbers and financial results.

In a note Tuesday morning, Citigroup warned clients that it downgraded Snap’s stock to a sell rating, citing the flood of negative reviews.

“While the recent redesign of its flagship app could produce positive long-term benefits, the significant jump in negative app reviews since the redesign was pushed out a few weeks could result in a decline in users and user engagement, which could negatively impact financial results,” wrote Citi’s Mark May on Tuesday.

The app’s new design is a marked departure from its previous layout and was supposed to make the software easier to navigate. However, many critics on Twitter and Reddit are finding it more unwieldy than before and tailored to advertisers instead of users.

The company did not immediately respond to a request for comment.

The update combines Stories and incoming Snapchats on one “Friends” page, while conversations are no longer ranked in chronological order. An algorithm now sorts Stories from friends it thinks you care about most.

In order to rewatch a Story, users have to swipe up and search a specific friend’s name; the page is full of sponsored content and features celebrity stories.

Citi’s May also cut his price target on the company to $14, implying 31 percent downside from Friday’s close; the analyst sees daily active users growing 18 percent in 2018, matching its year-over-year performance in 2017.

The updates are so unpopular that nearly 1.5 million people have retweeted a petition asking Snap to revert to the old version.

Disclosure: CNBC parent NBCUniversal is an investor in Snap.