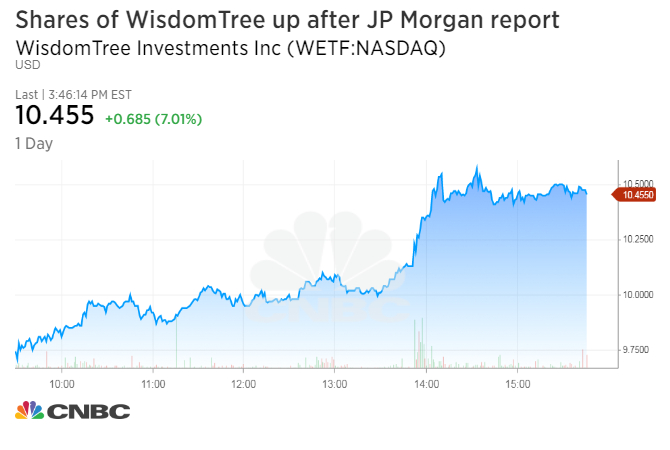 Shares of WisdomTree Investments jumped more than 6 percent Friday after reports that JP Morgan Chase is shopping for an exchange-traded fund firm.

The U.S. bank’s asset-management unit is looking to up its presence in the growing $3 trillion-plus ETF market, Bloomberg reported, citing two people who asked not to be identified. The bank spoke with the U.S. businesses of ETF Securities and had talks with Global X, which was recently bought by South Korea’s Mirae Asset Management, according to the report.

WisdomTree stock closed at $10.41 Friday following the report and is up more than 18 percent year over year.

J.P. Morgan, which launched its first ETF product in 2014, would be entering the market after strong inflows last summer. More than $23 billion of investor money entered the market in July, putting ETFs in the U.S. over the $3 trillion mark in assets under management, according to ETF.com.

M&A activity for the growing industry may be picking up. Invesco, the world’s fourth-largest ETF manager, bought Guggenheim’s ETF business for $1.2 billion in September.