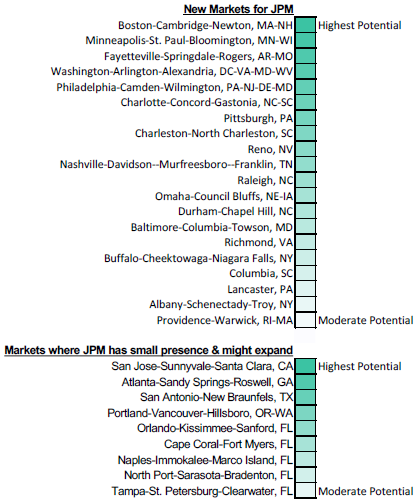 J.P. Morgan’s plans to open hundreds of branches in as many as 20 new markets over five years will spark a war with other big banks it doesn’t plan on losing, according to Morgan Stanley.

On the contrary, J.P. Morgan’s venture to open new locations in some of the country’s largest cities almost certainly means rival large-cap banks already established there will lose out, according to banking analyst Betsy Graseck. She reiterated her overweight rating and increased her price target on J.P. Morgan, which is Morgan Stanley’s top stock pick among the large banks.

“We expect more competition among the top five [banks] in deposit share in each market that J.P. Morgan enters,” wrote Graseck on Wednesday. “Who is most at risk in these markets? Incumbent banks that are most exposed to the areas J.P. Morgan is likely to enter include Bank of America (in 16 of 20 likely new markets) and Wells Fargo (in 13 of 20).”

In January, CEO Jamie Dimon told investors that a “healthy, strong company allows us to make these long-term sustainable investments,” citing tax breaks, reduced regulation and a better business climate. The company also announced that wages of roughly 22,000 workers will be increased to between $15 and $18 an hour in more than 100 cities.

Graseck increased her price target on Dimon’s company to $136 from $133, implying 18 percent upside over the next 12 months from Wednesday’s close. She also raised her 2019 and 2022 earnings per share expectations by 1 percent and 2 percent, respectively.

Analysts speculate that the expansion – which is expected to employ roughly 3,000 people – could include new locations in Boston, Philadelphia and Minneapolis, where Bank of America opened its first branch two years ago.

But while Bank of America could see a hit to deposits, Wells Fargo may be even more vulnerable if history is any guide; Graseck estimates that one-third of J.P. Morgan’s deposit share gains will come at the expense of Wells Fargo because 60 percent of J.P. Morgan’s target markets are already home to Wells.

San Francisco-based Wells Fargo already is grappling with Federal Reserve restrictions on its growth that were put in place this year until it rectifies its sales practices and board oversight following its fake account scandal and other revelations of improper sales.

“They’re going to feed off of something else. For the moment, Wells is in a no-growth position,” he said. J.P. Morgan is in “a very strong financial position and they’re taking advantage of that.”