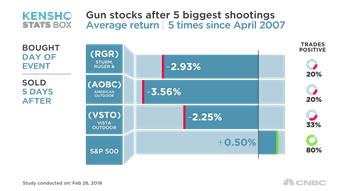 Gun makers are again the center of a national debate over how to put an end to mass shootings, and their stocks are trading like things are different this time.

Several major U.S. companies have dropped their associations with the National Rifle Association in the last few days, less than two weeks after a 19 year old with a semi-automatic rifle killed 17 people in a high school in Florida. Student protests and calls for action have stayed in the headlines, and politicians are under pressure to enact new gun safety rules.

As with deadly shootings in the past, some of the focus has been on the companies that make the weapons and ammunition and the people and companies that own them. Shareholder activism on gun control tends to flourish in the weeks following an incident and then fade away, if history is any guide.

Shares of gun makers follow a similar pattern. They drop in the immediate aftermath of a shooting and are mostly trading higher three months later. But data by a hedge fund analytics tool called Kensho shows the stocks of these companies are reacting differently this time.

Rifle maker Sturm Ruger & Co.’s shares are down more than 7 percent this month, and American Outdoor Brands (the parent of Smith & Wesson) is down more than 18 percent.

Shares of Vista Outdoor are up 20 percent this month. It makes accessories like riflescopes as well as bullets.

An analysis of the five deadliest mass shootings in recent U.S. history reveals that shares of those three companies traded down from the day of the incident to one week later, but not by as much as they are reacting now to the high school shooting in Florida.

Shares of Sturm Ruger, for example, averaged a one-week decline of 2.9 percent after the five biggest shootings since 2007, according to Kensho data. Shares of American Outdoor averaged a decline of 3.56 percent, while Vista shares fell an average 2.25 percent.

Three months after the date of those shootings, shares of Sturm Ruger averaged gains of 9.3 percent, and American Brands traded up 8.3 percent, according to Kensho data. Vista shares averaged a three-month decline of 19 percent, however.

The five deadliest shootings include those that occurred at the concert in Las Vegas and at the church in Texas in November, at the nightclub in Florida in 2016, at Virginia Tech in 2007 and at the elementary school in Connecticut in 2012.