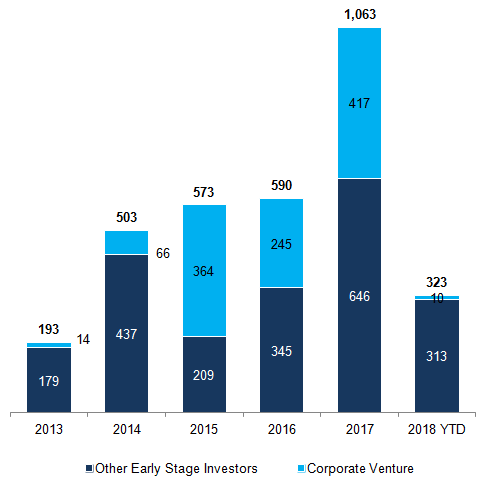 “I think this is a really good sign for the industry. It shows that a lot of companies are going to start consolidating and that will bring [out] the best talent,” said Erik Voorhees, an early investor in bitcoin who is now CEO of digital asset exchange ShapeShift. “I think you’re going to see a lot of that in 2018. These companies have so much capital at this point.”

Venture capitalists and other early stage investors put $1.06 billion into the crypto-economy in 2017, according to Lex Sokolin, global director of fintech strategy at financial research firm Autonomous Next. For the year so far, such investments stand at $323 million.

The entire cryptocurrency market capitalization has also grown from around $20 billion at the start of last year to around $500 billion in the last few weeks, according to CoinMarketCap.com. Bitcoin, the largest cryptocurrency by market cap, is up several hundred percent over the last 12 months and was trading near $10,000 Monday.

“These markets are still in their infancy but they hold enormous promise,” Circle co-founder and CEO Jeremy Allaire told CNBC in a phone interview Monday. “There’s going to be a huge amount of value creation.”

“Maybe the first $1 trillion company in the world will be created in this space,” he said.

Goldman Sachs and China-focused investment firm IDG Capital Partners are investors in Circle, which has raised a total of $136 million and has a valuation of at least $420 million, according to PitchBook.

Monday’s deal with Circle was reportedly sealed at $400 million, according to Fortune, citing a source. Circle had no comment and a representative for the exchange did not return a CNBC.com request for comment.

That valuation tops that of popular names in blockchain development, such as R3 and Chain, Autonomous Next’s Sokolin pointed out. But it still falls below that of Coinbase, estimated to be worth at least $1.6 billion.

A likely next step for some of these growing cryptocurrency businesses is going public on one of those exchanges. Asiff Hirji, Coinbase’s president and COO, said on CNBC’s “Fast Money” in December that the “most obvious path” for the company is to go public at some point.

“Personally I’m excited to see the first bitcoin company IPO. I think it should be Coinbase,” Voorhees said. “It will be a huge milestone for an industry that no one took seriously five years ago.”

As for Circle, Allaire said, “We have no intention of being a public company in the near future at all.”

CoinMarketCap lists 193 cryptocurrency exchanges, and some estimates put the figure even higher. Only the top four had a 24-hour trading volume of more than $1 billion.

“I do think the exchanges over time will need to consolidate,” said Michael Graham, an analyst at Canaccord Genuity who has covered internet stocks since the late 1990s. “If a company is going to be like a gorilla in the cryptosphere they’re going to need to make large, aggressive bets now.”

In the U.S. stock market, where daily trading volume is in the trillions of dollars, just two main players have emerged from years of consolidation: the New York Stock Exchange and Nasdaq.

Poloniex is the 18th-largest cryptocurrency exchange by trading volume, according to CoinMarketCap.com. The company is known for its supporting a variety of digital currencies, but little is known about its management.

Circle may have had reason to be confident in its purchase, however. Nathaniel Popper, author of “Digital Gold” and a New York Times reporter, tweeted a section from a confidential Circle presentation that said the Securities and Exchange Commission indicated it “would not pursue any enforcement action for prior activity” regarding the transaction.

The document also said that Circle will begin registering the new entity with authorities with the goal of becoming the “US’s first regulated crypto exchange.”

Circle said it would not comment on unverified documents. The SEC did not immediately respond to a CNBC request for comment.

Ryan Selkis, founder of open-source cryptoassets database Messari Crypto, said he thinks the Circle-Poloniex acquisition is the best news of the year so far.

“This is tremendous for the broader industry’s health. Circle is a terrific company that sets high standards around consumer protection and self-regulation, and the Poloniex acquisition will make a wide range of digital assets more safely accessible to the broader public.”