Why Volatility is the Norm When Trading the British Pound 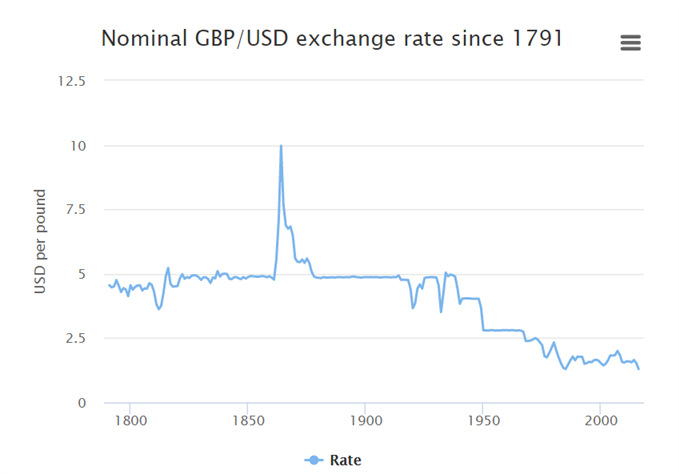 A professional bank trader once told this writer: “Nobody ever lost money selling the Pound”. As with many financial-market maxims it is, of course, false. Like any other liquid, tradeable asset, the Pound appreciates and depreciates moment by moment so selling at the wrong time will indeed lose you money. However, a look at its history shows that the Pound has fallen steadily over the centuries so the trader’s aphorism contains a germ of truth.

Perhaps more important from the perspective of a modern trader is that the Pound’s history is one of remarkable volatility, which makes trading it both potentially highly profitable and potentially ruinous. As the chart below of the Pound’s exchange rate against the US Dollar since 1791 shows, the UK currency doubled from around $5 to $10 in the late 19th Century and has since crumbled to its current level around $1.40.

That decline in the value of the Pound is less pronounced when the exchange rate is adjusted for inflation. However, the real, or inflation-adjusted, rate has still been remarkably volatile through the 20th Century and into the 21st.

New to forex and want to find out more about trading? Take a look at our Forex Trading Guides

The real rate cannot be traded in the same way as the nominal rate but the message is clear: even if the Pound has not been as weak as you might think, it has still fluctuated rapidly and erratically – providing both opportunities and potential pitfalls.

To understand the reasons for this, it is necessary to delve into history. According to a report by the World Economic Forum, the Pound was a unit of currency as early as 775 AD in Anglo-Saxon England. It is widely believed that it was originally a pound in weight of sterling silver coins, hence its full name of Pound Sterling, but it was later tied to gold rather than silver before being allowed to float freely. The Pound/Dollar – or GBP/USD – currency pair is still known as Cable, a term that originated in the mid-19th Century, when the exchange rate between the two began to be transmitted across the Atlantic Ocean by a copper sub-marine telegraph cable.

Over the centuries the Pound has been steadily debased by successive kings borrowing to fund wars and thereby stoking inflation, and it also tumbled when the gold standard was abandoned in 1931. It has not been all one-way, though. It soared in value when the US Dollar was devalued in 1933 and the two currencies were pegged at $4.03 at the outbreak of World War II. A crisis in the UK economy in 1967 led to a major Pound devaluation and the following chart shows its more recent history.

For help to trade profitably, check out the IG Client Sentiment data

As can be seen, the formation of the Exchange Rate Mechanism in 1979 was a pivotal moment for the Pound. The ERM tied several European currencies together and led eventually to the introduction of the Euro in 1999. Initially, the UK decided not to join but it did so in October 1990 before crashing out in September 1992 on a day known as Black Wednesday. The speculator George Soros was widely blamed for betting against the Pound.

The UK also decided not to join ERM II in 1999; a system designed for countries that had not adopted the Euro but intended to. That led to the US Dollar, the Euro, the Japanese Yen and the British Pound becoming the four major trading currencies. Along with the Chinese Yuan, they determine the value of the International Monetary Fund’s Special Drawing Right, an international reserve asset designed to supplement IMF member countries’ official reserves.

Like to learn more? Listen to our regular Trading Webinars

So what drives a modern currency’s value? The long-term picture painted so far has concentrated on wars, pegs to silver, gold and other currencies, and institutional structures such as the Exchange Rate Mechanism. Other factors such as inflation, government intervention in the financial markets and periodic economic crises also were – and remain – highly important.

Today, high inflation expectations will generally lead to central banks like the Bank of England and the US Federal Reserve restricting the supply of money to the economy, thereby lifting market interest rates and strengthening the local currency as investors buy it to invest in higher-yielding assets. Low inflation expectations will lead to more money being injected into the system to lower market interest rates, leading to selling of the currency by investors moving their money elsewhere. That’s known in market jargon as quantitative easing and the two tactics are known as tightening monetary policy and loosening it.

Looking for longer-term analysis on the Euro, the British Pound or the U.S. Dollar? Our DailyFX Forecasts for Q1 have a section for each major currency

Government intervention remains important too – witness the slump in the value of the Euro against the Swiss Franc in January 2015 when the Swiss government decided to remove the 1.20 Francs per Euro floor that had been in place for three years in an attempt to cap the Franc’s strength. As for economic disasters, the global financial crisis that began with the collapse of the Lehman Brothers investment bank in 2008 is a prime example of an event that can cause exchange-rate chaos.

In June 2016, when the British voted unexpectedly to leave the European Union, the Pound slumped by 12 cents, or 8%, against the US Dollar in a single trading session.

However, on a day-by-day basis, the factors causing an exchange rate to move are more prosaic, and they change over time. At one stage, it was often the release of international trade data, then it was money supply figures, now it is monetary policy: what will the central bank decide to do when it next meets? Will it tighten or loosen policy? Will it increase or lower official interest rates?

Why GBP is exceptionally volatile

This still does not explain, however, why the Pound is so exceptionally volatile. One possible reason is that the UK economy is particularly susceptible to so-called stagflation, a toxic mixture of stagnant economic growth and high inflation. This presents the Bank of England with a regular dilemma: whether to loosen monetary policy to combat economic weakness or tighten monetary policy to deal with the excess growth of consumer prices.

While the daily flow of economic data is important everywhere, it is particularly so in the UK, where a single week can see official figures released on, say, inflation, unemployment and retail sales. Each report is analyzed in detail for its possible impact on the next decision by the central bank on whether to tighten policy or loosen it. Arguably of even greater importance are the more timely non-government numbers such as the purchasing managers’ indexes for the manufacturing, construction and services sectors of the economy.

For the individual thinking about trading the Pound, this means both opportunities and drawbacks. The high volatility of the currency, coupled with its liquidity, means there are large profits to be made but also substantial losses. Moreover, liquidity is not confined to the GBP/USD pair; volumes are high too in the Euro/Pound and Pound/Yen crosses, EUR/GBP and GBP/JPY.

Arguably, therefore, trading the Pound is more for the seasoned trader than the novice. Both sides of the equation need to be analyzed carefully and stops need to be kept tight. If the trade moves against you it can do so quickly and substantially, so closing it automatically to limit your losses is essential.