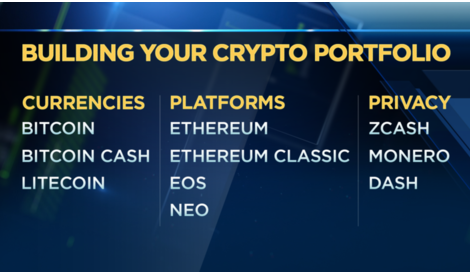 “Bitcoin is just the biggest of literally thousands of cryptocurrencies,” the founder of BK Capital Management told CNBC’s “Fast Money” on Wednesday. “[Cryptocurrency] is a world onto itself. It’s its own market. And just like the stock market it has its own organizational structure.”

It’s a mistake to invest only in bitcoin, thinking that’s a sufficient way to play the digital currency market, Kelly said.

That organizational structure includes large-cap, mid-cap and small-cap coins. Larger coins typically have market values above $10 billion, mid-size coins are between $1 billion and $10 billion and smaller coins fall below $1 billion.

“It’s not just the size of the coin, but how you use it,” said Kelly, who earlier this month said he has invested “like 90 percent” of his money in the cryptomarket.

Here are Kelly’s recommendations for starting a cryptoportfolio, and how much to invest in each area of the diverse market:

Names include large-cap coins such as bitcoin, bitcoin cash and litecoin.

“That’s where the new apps are coming,” Kelly said. “On all of these platforms, new things are being developed. Thousands of people are building on top of it.”

Names include Zcash, Monero and Dash.

“Not just things you don’t want people to see. But, maybe, if you’re a big company and you don’t want to show that things are moving around the world.”

Names include Storm, Metal, a computer app, and Salt.

“When I look at apps I want to look at things that are solving real-world problems,” Kelly said.

Names include Binance, Zerox and Polymath.

“That’s where all the money is being made right now,” Kelly said.

Names include ripple and stellar.

“What’s interesting about these, not only can they be used as a pure currency, but you can build on top of them,” Kelly said of their dual currency and platform function.