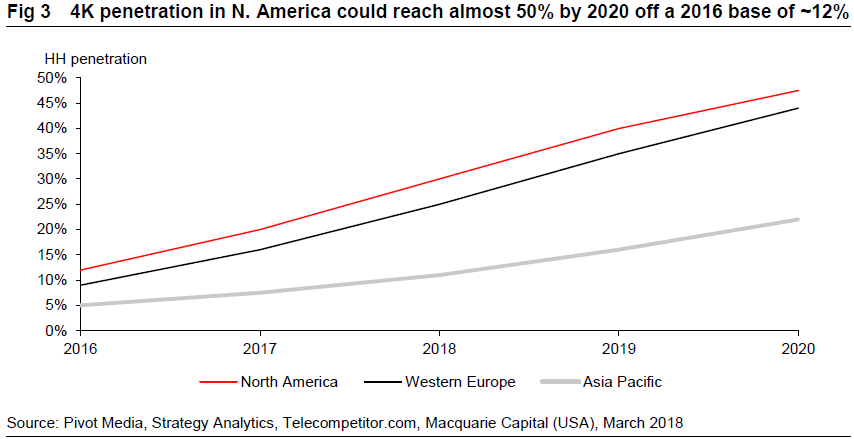 Netflix shares will march higher throughout 2018 as the company funnels cash into original content and subscribers upgrade to 4K ultra-high-definition televisions, according to two Wall Street firms.

UBS told clients Monday that it revised its financial estimates for Netflix upward as the company’s efforts in original content and customer retention widen its competitive moat.

“Increasingly building out its global production muscle and focusing on content that travels internationally, Netflix has emerged as a content powerhouse that is actively building a global moat,” wrote UBS analyst Eric Sheridan on Monday. “We see ample runway ahead for
international subscriber growth given: low penetration of existing global broadband households [and] low broadband penetration in international markets.”

Sheridan added that Netflix has achieved the same level of interest and recognition that premium programming producers generate. The second season of Netflix’s “Stranger Things,” for instance, garnered higher search interest than every season of HBO’s “Game of Thrones” in the U.S., according to the analyst.

Commenting on a related trend, Macquarie analyst Tim Nollen note that as people upgrade to the latest definition standard, the number of Netflix subscribers willing to pay a premium for its ultra-HD content is likely to climb in tandem.

“Netflix seems to have every secular trend in its favor. Our closer look at the backdrop to sub growth, pricing, and accounting items underscores our view that even more positive quality of earnings is taking shape,” Nollen wrote on Monday. “Another opportunity for Netflix is the proliferation of 4K ultra HD TVs and the replacement rate of older TV sets with this new definition standard globally.”

The analyst contended that people who tend to watch Netflix likely prefer screens with better resolution. And that, in turn, spells added revenue for the streaming company; while Netflix offers a $10 per month “Standard,” HD plan, its Ultra HD plan for 4K TVs cost $14 per month.

According to Macquarie research, the prevalence of 4K televisions in North America could reach 50 percent by 2020, up from 12 percent in 2016.

Nollen has a 12-month price target of $330 on Netflix, representing 9.6 percent upside from Friday’s close.

Shares of Netflix rose Monday after the analysts’ calls, up 4.6 percent. Netflix has consistently outperformed the broader market over the past year, climbing more than 120 percent; the shares are up 64 percent in 2018 versus the S&P 500’s 2 percent climb.

“Netflix is both a driver and a beneficiary of the 4K TV trend,” Nollen said. “Old TV’s reach end of life and new TV viewers enter the marketplace, and while these TV buyers may already have Netflix, the availability of higher definition streams for existing Netflix content means re-tiering has a natural driver.”