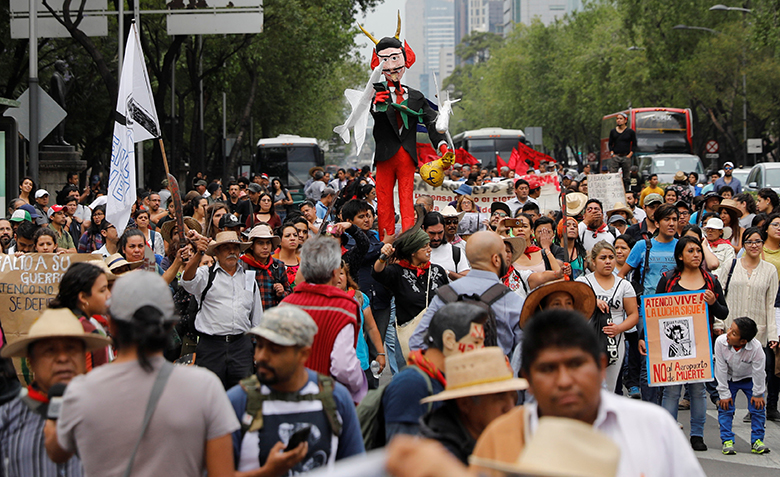 The fate of Mexico City’s New International Airport (NAIMC) is being seen by investors and bankers as a litmus test for the conciliatory approach to the markets taken by the incoming president.

Andrés Manuel López Obrador (Amlo) notably moderated his anti-markets’ rhetoric that he had adopted in the election campaign when making his victory speech on July 1.

Amlo deliberately used his victory speech to placate international investors by emphasizing the independence of the Mexican central bank and pledging to maintain fiscal discipline.

The comments saw the Mexican peso rally in the week after his victory.

His remarks also raised hopes that he might walk back his promise to scrap the project to build a new international airport on the outskirts of Mexico City.

Much of this expectation rested not on expected philosophical change but from a practical recognition.

“There are signed contracts for about 80% of the project and so it wouldn’t make any sense to cancel at this point,” is one typical response made by a banker who worked on the airport’s $6 billion-worth of international bonds.

“Maybe he has room to cut the cost by about a billion or increase the amount of private-sector financing, but at this point it’s too late to cancel.”

A report by Barclays in August estimated that the first phase of construction was 31% complete. The report also argued that the “successful completion of this project is essential for the long-term growth of the industry as Mexico City airport departed and received [around] 63% of the total transported passengers through the country”.

However, some close to the project told Euromoney that it was nearer to 50% complete and the project has been speeded up to counter the cancellation risks.

“The managers deny it, but it looks like there has been an acceleration in the project,” says one. “I was there recently and the development is amazing – it’s there. I was told there are about 5,000 trucks on site every day.”

I would have thought there would have been more weight given to the practical arguments, such as the degree of advancement in the works that are already there

Another Mexico City-based banker agrees with this assessment, saying: “The total cost is between $10 billion and $12 billion and they already have about $7 billion financed.

“The investment is too big to just pull the plug. Maybe there is some room to reduce costs and probably they will try to find a way to reduce the budget, but I am convinced the new airport will be built in the same place and in a very similar way to what is planned now.”

He adds that the existing Mexico City airport would “be in chaos” by 2020 if the new site was cancelled.

However, instead of walking back his election campaign pledge to cancel the new airport, Amlo has committed to a public referendum on the plans.

This compromise hasn’t satisfied many in the finance community.

“I would have thought there would have been more weight given to the practical arguments, such as the degree of advancement in the works that are already there,” says Exotix’s Mexico analyst Rafael Elias.

“I don’t think a public referendum is the most practical or intelligent way to [determine the future of the airport].”

JPMorgan cited a recent poll in Mexico that found that 54.4% of those eligible to vote in the proposed public consultation would vote in favour of maintaining the project, while 29.4% would like to see the project modified.

Amlo has said the referendum will be binding, which would require it to be taken on the day of a federal election, but the president-elect’s strength in congress could enable a constitutional change that allows binding referenda to be held independently.

While JPMorgan’s poll suggests the new airport will continue, the use of a plebiscite to determine the future of large infrastructure plans could backfire.

Amlo also plans to develop highways, railways and a large oil refinery and JPMorgan says that while there is “preliminary private-sector interest in participating in high-impact infrastructure projects”, the new government’s use of a referendum is raising the prospect that it will make frequent use of consultations or referendums to decide on high-impact projects.

The report concludes that the new administration “needs to clarify some doubts that are generating uncertainty and that end the honeymoon sooner rather than later”.