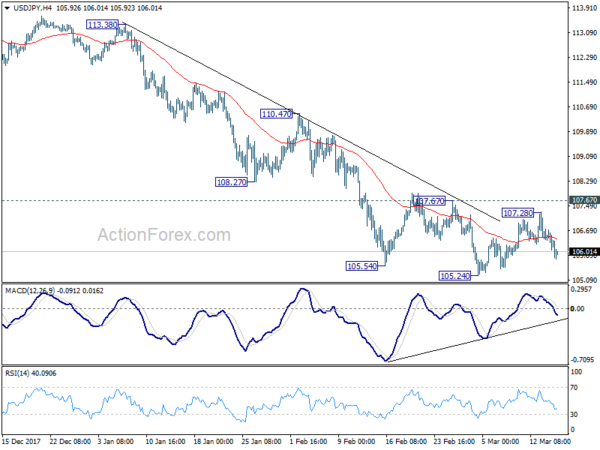 Trade war continued to be the main theme in the financial markets. In particular, investors are getting increasing concerned with the reported USD 40b tariffs on Chinese goods by the US. DOW closed -1.0% lower overnight to 24758.12. S&P 500 was down -0.57% while NASDAQ lost -0.19%. In particular, Boeing dropped more the -2% on worries on retaliation by China. In the currency markets, Canadian Dollar is trading as the weakest major currency for the week, followed by Dollar. Sterling is leading the way, followed by Yen. Both Sterling and Yen are also strong today. SNB rate decision will be a focus today but it’s unlikely to trigger much volatility.

ECB President Mario Draghi emphasized in a conference in Frankfurt yesterday that any monetary policy adjustments must be “predictable” and carried out “at a measured pace”. For now, he said ECB “still need to see further evidence that inflation dynamics are moving in the right direction”. Therefore, “monetary policy will remain patient, persistent and prudent.” Draghi also added that “sharp repricing” in the financial markets must be carefully monitored.

Regarding the steel and aluminum tariffs of the US, Draghi expected the initial impact to be small. However, he warned that “there are potential second-round effects that could have much more serious consequences.” And, risks include “retaliation across other goods and an escalation of trade tensions, and the potential for negative confidence effects which would weigh on business investment in particular.”

ECB Chief Economist Peter Praet echoed on monetary policy and said it’s too soon to declare “mission accomplished” regarding inflation. Meanwhile, “with the passage of time, the indication that policy rates will remain at their present levels well past the end of net asset purchases will gradually cease to provide sufficient guidance”. He added that “our forward guidance on the path of our policy rates will have to be further specified and calibrated.”

ECB Vice President Vitor Constancio commented on financial stability at the conference. He noted that “the sharp movements that took place in the U.S. equity market in February 2018 demonstrated how sentiment can change very quickly — and market participants should be well aware of this risk.” And, “in an environment characterized by search for yield and depressed volatility, technical factors can greatly amplify initial market movements.”

More economists are paring back their expectation of an RBA hike this year. Macquarie Bank now no longer sees RBA hiking within 2018. it noted in a report that “the primary reason for pushing back our RBA call is that the Bank can err on the side of growing the economy faster for longer to erode spare capacity and have confidence that inflation is firmly moving back into the 2-3% target.” .

It referred to other advanced economies for the pattern of falling unemployment rates without wage growth. At this same time, “Australia’s unemployment rate remains at 5.5% and noticeably above ‘full employment’.” Also, “after two years of below-target inflation, and at least another one to come, there seems little danger of generating a meaningful pick-up in inflation expectations from keeping interest rates low for longer.”

Besides, “housing has settled”, and “investor activity in the housing market has subsided significantly and housing prices have broadly flattened out. There is “little danger” or “reacceleration in housing price or credit growth.” And therefore, “the source of much angst for the RBA — fast growth in housing prices in Sydney and Melbourne – has eased.”

NAB recently pushed back their RBA rate expectation too and predicted only one hike this year, not two. Westpac continued to expect no hike until 2019.

The day ahead: SNB to stand pat

The SNB meeting today would bring no change in the monetary policy. Policymakers would reiterate the pledge to intervene the currency market in defense of excessive appreciation of Swiss franc. However, the is less urgency for the central bank to act given the strength in the euro. Swiss will also release PPI in European session.