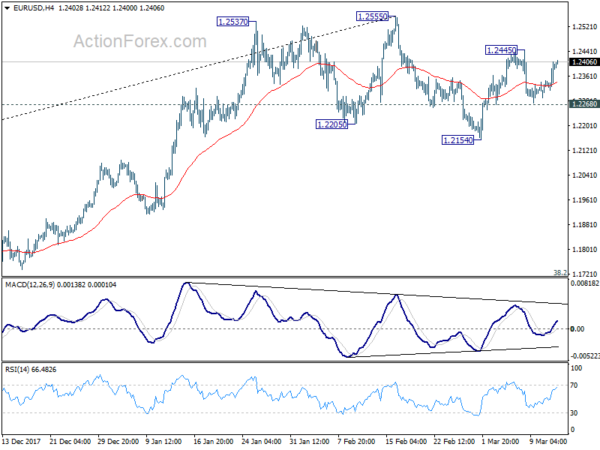 In the currency markets, Dollar is under broad based pressure today, it’s trading as the second weakest for the week, just next to Canadian Dollar. Sterling is the strongest one for the week, followed by Swiss Franc.

Trump clearing the way on measures to push back China threats

Trump fired Secretary of State Rex Tillerson after some clashes, and replaced him by Mike Pompeo, Director of the CIA. That’s less than a week after departure of White House economic advisor Gary Cohn. Both Tillerson and Cohn are seen as the globalists in Trump’s team. And their departure, is another step in the protectionist direction. Also, Pompeo is known for endorsing “pushing back against the Chinese threat”.

Separately, it’s reported that Trump is preparing a new package targeted at China, on trade and investments. There could be as much as USD 60b tariffs on Chinese goods. The tariffs, associated with a “Section 301” intellectual property investigation, under the 1974 US Trade Act begun in August last year, could come in the very near future.

And, White House blocked semi-conductor manufacturer Broadcom’s bid for the semiconductor maker. Trump declared earlier in the week that the proposed US$117B deal was prohibited on national security grounds. He noted that “there is credible evidence” that Broadcom through control of Qualcomm “might take action that threatens to impair the national security of the United States”. Indeed, it is believe that the key reason behind is the US concern over Broadcom’s business practice of cost reduction. It is concerned that the company would reduce investment and weaken Qualcom’s 5G development roadmap, thus weakening US position in the technology and giving way to China to take the lead.

BoJ Governor Haruhiko Kuroda repeated his rhetorics that Japan is still long way from meeting the 2% inflation target. Therefore, it’s too early to talk about stimulus exit. But he assured the parliament that the central bank has the tools to smoothly exit from the ultra-loose monetary policy when needed. Kuroda added that “by combining various tools, it’s possible to shrink the BoJ’s balance sheet at an appropriate pace while keeping markets stable.” Meanwhile, he also hailed that while keeping long term yield low with the policy, BoJ also managed to maintain markets’ trust in JGBs. He noted “If market trust over Japan’s debt is eroded, it will be difficult for us to keep interest rates low with our yield curve control policy.”

Release earlier, minutes of BoJ January meeting showed that some board members were concerned with the impact of the loose monetary policy, especially on banks. The minutes showed “some members said it was important to continue to monitor and assess the positive impacts and side-effects of the current monetary easing policy, including its effects on Japan’s banking system.” Some member suggested to raised the yield target as economy improves. But another member (obviously Goushi Kataoka), called for ramping up the stimulus.

BoC Governor Stephen Polo sounded quite balanced on the labor market in his speech overnight. But markets looked at the dovish side of it. Poloz said there are untapped potential in the economy, including workforce by youth, women, indigenous peoples, Canadians with disabilities and recent immigrants to Canada. And, he added “it is not much of a stretch to imagine that Canada’s labour force could expand by another half a million workers.” On the other hand, he noted that participation rate usually declines during recessions and rebounds on recovery. But “that has yet to occur for young Canadians”. He over tone suggested there could be larger slack in the labor market and the economy could handle more growth without inflation. The markets interpreted that as a warning that tightening may not happen as fast as they expected. But after all, to us, NAFTA renegotiation is the most critical factor for BoC ahead.

Looking ahead, German CPI, Eurozone industrial production and employment will be featured in European session. US retail sales, PPI and business inventories will be featured later in the day.

EUR/USD’s rebound continues today. While intraday bias remains neutral, focus is back on 1.2445. Break there will turn bias back to the upside for 1.2555 high. Decisive break there will carry larger bullish implication. But again, break of 1.2268 will argue that fall from 1.2555 is likely resuming. And intraday bias will be turned back to the downside for 1.2154 support and below.