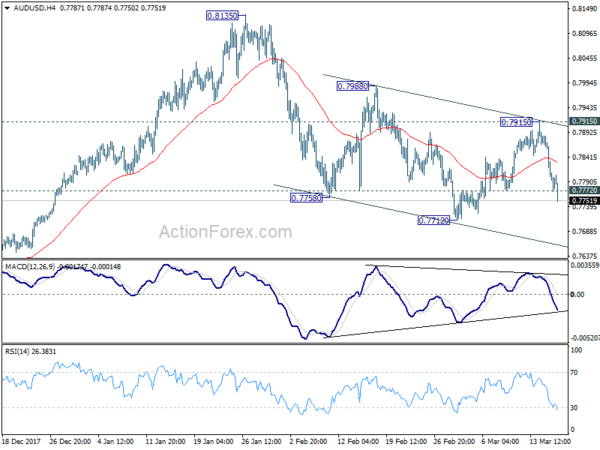 Safe haven flows remain the main theme in the forex markets today even though global equities are rather resilient. Yen and to a lesser extend Swiss Franc are trading generally higher. Meanwhile, commodity currencies, Canadian, Australian and New Zealand Dollars suffer most. Fresh selling is indeed seen in early US session on them. Dollar is trading a touch firmer against Euro and Swiss franc. But after all the volatility this week, EUR/USD is holding above 1.2268 minor support well, despite downward revision in Eurozone CPI. GBP/USD is also holding above 1.3873. It’s overall, more about selling commodity currencies.

ECB Praet prefer not to revise forward guidances too early

ECB chief economist Peter Praet sounds cautious as usual. In the latest ECB meeting, the central bank took away the option to expand the asset purchase program again. But going further, Praet said “I would not revise the guidance too early, because that could send wrong signals about the end of our net asset purchases.” And, “I wouldn’t say there is a date or a deadline” for the program.

He also added that “it is clear that if you believe that the degree of slack is higher, then the process of convergence to below, but close to, 2 percent over the medium term would be drawn out. ” And, “other things being equal, it would (mean a) shallower (inflation path)”.

Referring to ECB’s pledge to keep interest at current level “well past” end of asset purchase, Praet said “markets quantify the ‘well past’ interval as ‘up to next spring’.” And he emphasized that “once you stop net asset purchases the signaling aspect of the asset purchase program disappears and you therefore have to be much more precise about the future path of the short term rates.”

It’s reported earlier that UK Brexit Secretary David Davis is targeting to complete the legal text of the transition deal at the two-day summit from March 22. However, it’s unlikely for a resolution on soft Irish border to be reached. EU proposed a fall back option in its own draft published earlier this month. That is, should there be no compromisable solution, Norther Ireland would stay in the customs union along side Republic of Ireland. But UK Prime Minister Theresa May has instantly and bluntly rejected that idea. Intensive talk is now planned between March 26 and April 18 on the issue.

Businesses in UK would definite request a deal with full clarity. Any conditions in the deal attached to the outcome of Irish border issue would dissatisfy UK businesses and markets.

In the statement of March 12 FPC meeting, BoE noted that there are risks related to Brexit, domestic, and global vulnerabilities. In particular, the global risks are principally in “debt markets. It pointed out that “Risks stemming from corporate debt in the United States have continued to build.” Also, “financial vulnerabilities in China remain elevated.”

For UK, current account deficit “remains larger by international standard” And, recent quarter deficit “has been increasingly funded by capital inflows – rather than sales of foreign assets by UK residents”. And that increase UK’s reliance on “confidence of foreign investors.”

Nonetheless, the statement assured that “UK banking system could continue to support the real economy through a disorderly Brexit.” And, “Brexit risks did not warrant additional capital buffers for banks”.

Fitch rating agency predicts RBA to raise cash rate by 25bps this year. It also predicts another 50bps hike next year in 2019.

What Fitch observed is that RBA appears comfortable lagging behind other central banks in tightening policy, allowing exchange rate flexibility to serve as a buffer”. This is in-line with what RBA Governor Stephen Lowe has repeated a couple of times. That is, RBA didn’t cut as deep as other global central banks. And therefore, it also doesn’t need to reverse that cycle as others like Fed and BoC.

But Fitch expects Australia economy to gain further momentum this year with growth holding steady at 2.7% in 2019. That’s thanks to “strong terms of trade on income, broadly accommodative financial conditions and buoyant prospects for investment”.

RBA Deputy Governor Guy Debelle warned that markets are under pricing the risks of global monetary stimulus remove. He pointed to “equity prices embody a view of the future that robust growth can continue without generating a material increase in inflation.” And, “there is little priced in for the risk that this may not turn out to be true.” Meanwhile, to him, the market volatility back in February, with sudden selloff in stocks, was just “a small example of what could happen following a larger and more sustained shift upwards in the rate structure.” He admitted before wrong in predicting higher volatility before, but added “I think there is a higher probability of being proven correct this time.”

New Zealand Business NZ manufacturing PMI dropped to 53.4 in February, down from 54.4. Among the sub-indices, production rose 0.4 to 53.9, employment rose 3.3 to 54.8, new orders rose 5.1 to 54.8, deliveries rose 2.9 to 52.7. But finished stocks dropped -1 to 51.1. Bank of New Zealand economist Doug Steel noted in the release that “Q1 manufacturing GDP wouldn’t be much different from Q4’s based on the “generally slower PMI”. Business NZ manufacturing executive director Catherine Beard said pace of expansion had levelled off in recent months and “noted the sluggish start to the year with a dip in new orders being a common message.”

IMF Managing Director Christine Lagarde urged politicians to “resolve trade disagreements without resort to exceptional measures”. She warned that “trade wars not only hurt global growth, but they are also unwinnable”. And, “self-inflicted harm of import tariffs can be substantial even when trade partners do not retaliate with tariffs of their own.” She added that ” protectionism is pernicious, because it puts the biggest strain on the poorest consumers who buy relatively more low-priced imports.” And “harming trade is bad for the economy and bad for people.”

She emphasized “the way to address global economic imbalances is not to raise new obstacles to trade.” That is, by “using fiscal means to address global imbalances is critical”, including “lowering deficits in the US to bring public debt towards a sustainable path, and stronger infrastructure investment and education spending in Germany,” At the same time, ” those who are adversely affected by globalization and technological progress should receive more support to ensure that they can invest in their skills and transition to higher-quality jobs.”

The IMF’s Global Prospects and Policy Challenges report also noted that “the global expansion is gaining strength from the pick-up in international trade, and it should not be put at risk by the adoption of inward-looking policies.” “The modernization of the rules-based multilateral trade system should continue, anchored in the World Trade Organization, with well-enforced rules that promote competition and a level playing field. Co-operation is also needed to tackle excess global imbalances.” The report also warned “the re-emergence of unilateral trade restrictions may escalate tensions and fuel global protectionism, disrupting worldwide supply chains and affecting long-term productivity.”

In the bigger picture, medium term rebound from 0.6826 is seen as a corrective move. It might still extend higher but we’d expect strong resistance from 38.2% retracement of 1.1079 to 0.6826 at 0.8451 to limit upside to bring long term down trend resumption. On the downside, break of 0.7500 support will now be an important signal that such corrective rebound is completed.