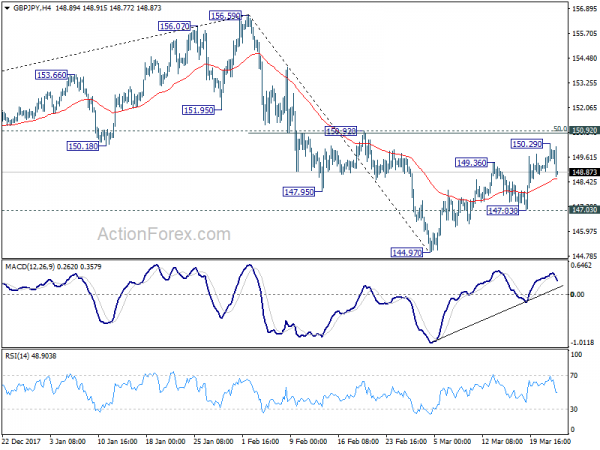 Sterling attempts to rally after BoE rate decisions but failed to sustain gain. On the other hand, Yen is quietly stealing the show on risk aversion. Investors are worried that the world is finally entering into the phase of trade war with US President Donald Trump’s scheduled announce of tariffs against China. Australian Dollar remains the weakest one, for its tie with China, and as weighed down by weaker than expected job data. Euro follows as the second after a string of soft confidence indicators suggested that it’s recent growth momentum has already peaked.

Trump to announce USD 50b tariffs against China, exempt EU from still tariffs

Trump is set to announce the tariffs on 100 different types of Chinese goods today, as follow up to the section 301 of the Trade Act of 1974 investigation. Bloomberg reported that the targeted amount would be at around USD 50b annually. White House official Raj Shah also said in a statement that “tomorrow the president will announce the actions he has decided to take based on USTR’s 301 investigation into China’s state-led, market-distorting efforts to force, pressure, and steal U.S. technologies and intellectual property.” It’s believed that the tariffs won’t take effect immediately. And the list of targeted products will be finalized after industry input. But it’s only confirmed when it’s confirmed.

Jake Parker, vice president of China operations at the U.S.-China Business Council in Beijing, warned that “tariffs will do more harm than good in bringing about an improvement in intellectual property protection for American companies in China.” And, he urged ‘a focused effort to fix the problems is better than imposing sanctions that will bring collateral damage to American households, farmers, and manufacturers.” Also, Parker questioned the purpose of the tariffs and asked “How will that fix the problem? What actions does the administration want China to take to improve IP protection and end forced technology transfer?” He hoped that Trump’s administration will “spell this out”.

Separately, EU has already secured temporary exception from the steel and aluminum tariffs. And Trump will announce it today to. That make us wonder, who else is still on the list?

BoE left bank rate unchanged at 0.50% and asset purchase target at GBP 435b as widely expected. Sterling initially spiked higher as known hawks Michael Saunders and Ian McCafferty dissented and voted for rate hike. These two have history of dissenting and pushing for tightening since last year. However, the Pound’s strength was limited as apart from voting, today’s announcement is not much different from the February’s. Overall tone of the statement remained cautious. And, Brexit development was just briefly mentioned. The essential part regarding Brexit was totally unchanged. The was no acknowledgement of the Brexit transition deal.

Regarding the economic outlook, BoE maintained that the projected 1.75% GDP growth would be more than offset 1.5% supply growth. And small margin of excess demand was projected to emerge by early 2020. And that would push up domestic costs. Thus, “inflation remained above the 2% target in the second and third years of the MPC’s central projection.” BoE added that “ongoing tightening of monetary policy over the forecast period will be appropriate to return inflation sustainably to its target at a more conventional horizon.” This suggests that it’s more confident regarding tightening ahead. But BoE reiterated cautious that “any future increases in Bank Rate are likely to be at a gradual pace and to a limited extent.

Hence, Brexit development just unlocked the two known hawks out of the cage. But it didn’t make BoE more likely to hike in May.

Markit Chief Business Economist Chris Williamson noted in the statement that ” the loss of momentum since the buoyant start to the year has been quite dramatic.” One key factor is the strength in Euro which took an “increasing toll on export performance”. Political uncertainty also “appears to have intensified, dampening demand”.

After all, the average PMI readings still suggests 0.7-0.8% GDP growth in Eurozone in Q1. But Eurozone growth ” peaked around the turn of the year and the region is settling into a slower, but still robust pace of expansion.”

German Ifo: Threat of protectionism dampened mood in the economy

Japan PMI manufacturing dropped to 53.2 in March, down from 54.1 and missed expectation of 54.3. Markit economist Joe Hayes noted in the release that the data signalled a “weaker improvement in overall business conditions in the manufacturing sector”. In particular, output, new order and employment growth slowed. Nonetheless, new business grew for an eighteenth straight month. And businesses raised output prices in quicker pace. These are seen as “confidence in the demand climate and purchasing power of their clients”.

Economists pushed back expectation on timing of BoJ exit

NZD is relatively steady after RBNZ kept OCR unchanged at 1.75% as widely expected, and maintained a dovish stance. Outgoing Acting Governor Grant Spencer gave an interview before handing over to Adrian Orr. He noted that RBNZ shouldn’t comment on NZD’s exchange rate. And, he emphasized that “we should only comment on the currency if it’s really pretty clear that it’s out of alignment and you’re wanting to have some impact, some sort of jaw-boning effect”. Though, he acknowledged that “in the past we have got into this situation where we sort of had to make a statement about the currency and if we didn’t the market was going to react.” But then, he also said that NZD is “in the vicinity of fair value”.

In the accompany statement, RBNZ maintained that “monetary policy will remain accommodative for a considerable period.” It said, “inflation is expected to weaken further in the near term”, before heading up to 2% target “over the medium term”. And, “tradeable inflation is projected to remain subdued through the forecast period.” At the same time, “non-tradables inflation is moderate but is expected to increase in line with a rise in capacity pressure.” Regarding the economy, “growth is expected to strengthen, supported by accommodative monetary policy, a high terms of trade, government spending and population growth.”