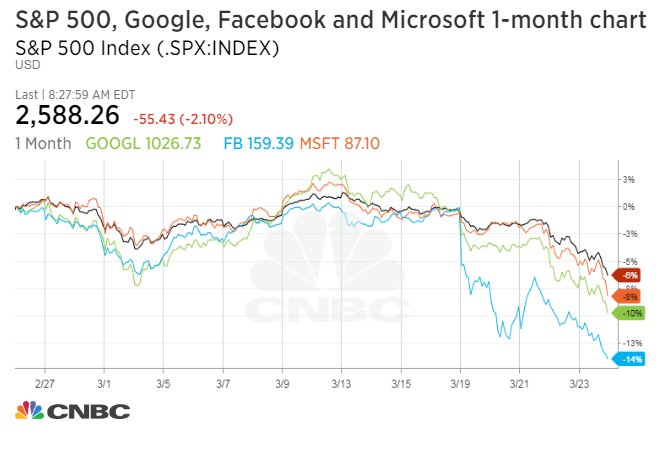 We have a “cautious stance on [the] tech sector, which has elaborate supply chains, is sensitive to consumer and corporate confidence, and where the adverse trade impact could be material,” wrote Mislav Matejka, global equity strategist at the bank. “This is especially after tech has had such a dramatic run already. In the past five years, Tech is up 130 percent globally. … Tech valuations are no longer attractive.”

Trump’s move to impose tariffs on up to $60 billion in Chinese imports stoked fears of a global trade war when he announced on Thursday the action would be “the first of many.” Beijing responded the next day, saying it may target 128 U.S. products with an import value of only $3 billion; the action – though mild – was enough to spur concerns of broader, more intense retaliation down the road.

The S&P 500 fell more than 2 percent both Thursday and Friday, while the Dow Jones industrial average lost more than 1,000 points as trade-exposed General Electric and 3M led the index into a correction.

But among the market’s worst-performing sectors was information technology, as the “outright expensive” industry according to J.P. Morgan, fell nearly 6 percent for the week. Shares of Google-parent Alphabet fell more than 9.5 percent, Microsoft dropped 7.8 percent, and Facebook — plagued by a data scandal involving Cambridge Analytica — shed more than 13 percent.

The recent weakness in the sector comes after one of its best years since the dot-com bubble. But tech’s historic run has left many on Wall Street wondering if the party may be winding down.

“Given the years of outperformance and demanding valuations, we believe that investors should lock the profits in the technology sector,” Matejka said, noting tech’s 2017 rally. “Trump’s tariffs on China are expected to target aeronautics, modern rail, new energy vehicles and high-tech products. … Tech hardware and machinery are among the largest U.S. import categories, and, in our view, are at risk.”

Some tech stocks – including Microsoft – rose Monday morning after the Chinese foreign ministry said it would consider holding talks with the United States to try to resolve differences over trade.