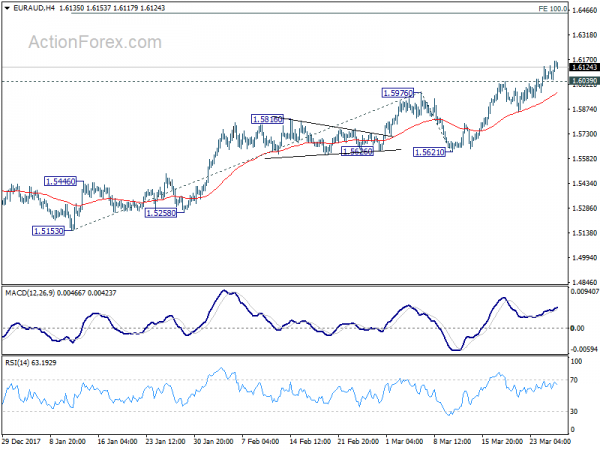 There was some volatility seen yesterday in the forex markets. But as dusts settled, Euro is staying as the strongest one for the week, followed by New Zealand Dollar and Sterling. On the other hand, Yen and Dollar are trading as the weakest one, followed not too far away by Australian Dollar. No important levels of dollar pair were broken with yesterday’s moves. EUR/USD and GBP/USD retained near term bullishness for further rise. And, USD/JPY is staying bearish. As liquidity continues to drop ahead of holiday, we might see more such volatility ahead.

Facebook was downgraded by Bank of America Merrill Lynch. Its CEO Mark Zuckerberg would testify before the US Congress on the data privacy scandal. Facebook dropped -4.9%. Meanwhile, Twitter slumped 12% after Citron Research said it was short the stock while Nvidia was down -7.8% after the company suspended self-driving tests. While US-China trade friction has shown signs of cooling, it was reported that the US might still restrict technology investment from China.

It’s confirmed that North Korean leader Kim Jong-un has taken his first know foreign trip as president this week. And he met with Chinese President Xi Jinping and other officials in Beijing. It’s seen as a symbolic visit of courtesy ahead of Kim’s planned meeting with South Korean President Moon Jae-in in April, and US President Donald Trump in May. Kim should have explained his positions regarding the summits and sought China’s position too.

The issue of denuclearization of the Korean Peninsula is something that leaders from the US, South Korea and China would like to resolve in the coming months. White House press secretary Sarah Huckabee Sanders hailed themselves that “we see this development as further evidence that our campaign of maximum pressure is creating the appropriate atmosphere for dialogue with North Korea”.

On the other hand, China’s Xinhua news agency reported Kim saying that “the issue of denuclearization of the Korean Peninsula can be resolved, if South Korea and the United States respond to our efforts with goodwill, create an atmosphere of peace and stability while taking progressive and synchronous measures for the realization of peace.”

US to restrict tech sector investment from China

As the market gauging the developments of US-China trade tensions, US Commerce Secretary Wilbur Ross told Fox News that the country and China were “ending up with negotiated deals, not trade wars”. However, there were reports suggesting that the US was looking to protect the domestic tech sector by curbing investment from China, by using an emergency law. Indeed, that the Fox interview, Ross noted that there will be “limitations on foreign investment” and President Donald Trump would take “other action” on foreign takeovers.

New Zealand ANZ business confidence dropped to -20 in March, down from -19. That means a net 20% of businesses are pessimistic about the year ahead. ANZ noted in the release that “headline business confidence and firms’ views of their own activity have trodden water in March, both little changed from the preceding month.” Also, “belying the headline measures somewhat, all key activity indicators improved further, albeit while remaining well off their cycle highs.” Also, “pricing indicators were broadly steady”. ANZ also indicated that the growth indicator, which combines business and consumer confidence, continues to suggest growth around 2-3% y/y.

EUR/AUD’s rally is still in progress and intraday bias remains on the upside. Current rise should target 100% projection of 1.5130 to 1.5976 from 1.5621 at 1.6444 next. On the downside, below 1.6039 minor support will turn intraday bias neutral and bring consolidation first. But retreat should be contained well above 1.5621 support to bring rally resumption.

In the bigger picture, current development suggests that rise from 1.3624 is not completed yet. And it’s still in progress for 1.6587 key resistance level. We’d be cautious on strong resistance from there to limit upside, on bearish divergence condition in daily MACD. But for now, break of 1.5621 support is needed to be the first sign of medium term reversal. Otherwise, outlook will stays bullish even in case of deep pull back.