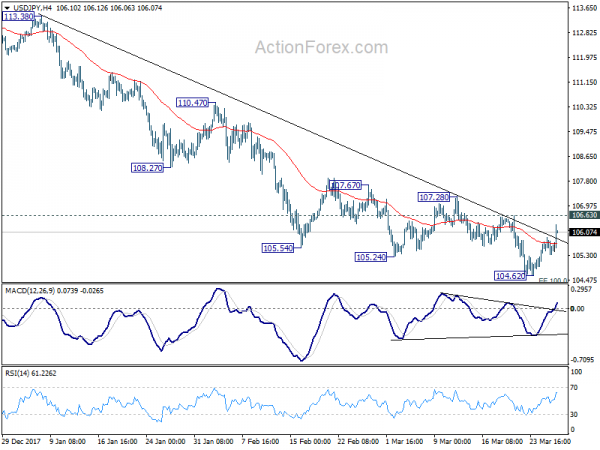 The pattern of risk on/risk off continues today. After opening lower, European indices pare back much losses with FTSE now back in black at the time of writing. US futures also point to slightly higher open. Tech stocks, who were the main reason of yesterday’s selloff, recover mildly. Facebook’s announcement of new privacy tools that streamline the process of personal data control is taken well by the markets. And as a result, Yen and Swiss France are steeping sold off entering into US session. Australian Dollar and Canadian Dollar are trying to stage a recovery, followed by Dollar. But after all, it’d quarter-end trading with markets in holiday mood. Those movements might no be again to persist.

Released from US today, Q4 GDP growth was finalized at 2.9% annualized, revised up from 2.5%. GDP price index was unchanged at 2.3%. Wholesale inventories rose 1.1% mom in February. Trade deficit widened slightly to USD -75.4b in February. From UK, CBI reported sales dropped to -8 in March. Germany Gfk consumer confidence rose 0.1 to 10.9 in April.

US President Donald Trump responded to North Korean Leader Kim Jong-un’s official visit to China. He tweeted that “received message last night from XI JINPING of China that his meeting with KIM JONG UN went very well and that KIM looks forward to his meeting with me. In the meantime, and unfortunately, maximum sanctions and pressure must be maintained at all cost!”

There is no official details regarding the purpose and content of the visit. It’s seen as a symbolic visit of courtesy ahead of Kim’s planned meeting with South Korean President Moon Jae-in in April, and US President Donald Trump in May. Kim should have explained his positions regarding the summits and sought China’s position too.

China’s Xinhua news agency reported Kim saying that “the issue of denuclearization of the Korean Peninsula can be resolved, if South Korea and the United States respond to our efforts with goodwill, create an atmosphere of peace and stability while taking progressive and synchronous measures for the realization of peace.”

Bloomberg reported the European Commission urged the region’s governments today to stand united in trade talks with the US, and be ready to “think out of the box fast”. EU is seeking to follow South Korea to get indefinite exemption on the steel and aluminum tariffs by May 1. But, the option of re-negotiation of EU-US free trade agreement is ruled out by EC. Unilateral European concessions to the US is also ruled out.

It was also reported by Bloomberg that Germany is adopting a flexible approach in dealing with the US and is willing to offer concession to the US. Germany Chancellor Angel Merkel is believed to be ready to lower the 10% EU tariff on autos to avoid a trade dispute. But that is in total opposite position to France. President Emmanuel Macron is clear in his message that European steel and aluminum exports pose no security threat to the US. And the rules of international trade need to be “reinforced” to ensure such a level playing field.

New Zealand ANZ business confidence dropped to -20 in March, down from -19. That means a net 20% of businesses are pessimistic about the year ahead. ANZ noted in the release that “headline business confidence and firms’ views of their own activity have trodden water in March, both little changed from the preceding month.” Also, “belying the headline measures somewhat, all key activity indicators improved further, albeit while remaining well off their cycle highs.” Also, “pricing indicators were broadly steady”. ANZ also indicated that the growth indicator, which combines business and consumer confidence, continues to suggest growth around 2-3% y/y.

USD/JPY’s rebound from 104.62 extends to as high as 106.33 so far today. But still, it’s staying well below 106.63 resistance. Intraday bias remains neutral with near term outlook staying bearish. On the downside, break of 104.62 will resume larger fall fro 104.20 projection level first. Sustained break there will pave the way to 98.97 (2016 low). Nonetheless, break of 106.63 will indicate short term bottom and turn bias back to the upside for stronger rebound.