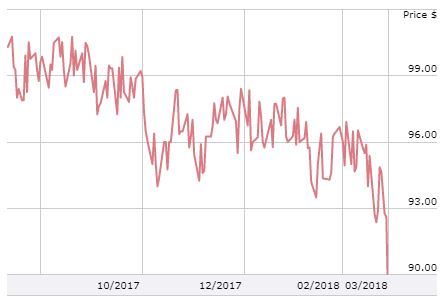 The credit ratings agency also said the electric car maker will likely need to raise more money in the near future to meet its cash needs and maintain its expected pace of expansion.

Moody’s lowered its corporate family rating on Tesla to B3 from B2 and downgraded its rating on the company’s senior notes to Caa1 from B3. The speculative grade liquidity rating was cut to SGL-4 from SGL-3.

Tesla declined to comment on the Moody’s downgrade. S&P has a negative B rating on Tesla and a negative outlook, as of April 2017.

“Tesla’s ratings reflect the significant shortfall in the production rate of the company’s Model 3 electric vehicle,” Moody’s said in a release. “Tesla’s rating could be lowered further if there are shortfalls from its updated Model 3 production targets.”

Elon Musk’s electric car company had planned to produce 5,000 Model 3 sedans a week by the end of last year, but has since pushed that goal out by half a year.

The automakers’ shares were mildly lower in after-hours trading Tuesday. They fell 8.2 percent during the day to their lowest since Feb. 2017 after the National Transportation Safety Board tweeted it was investigating a fatal Tesla car crash. Shares are now down 28 percent from their record high reached in September and in bear market territory.

The price on Tesla’s eight-year junk bond, which matures in 2025, fell to its lowest since it was issued in August. It hit 90.8 cents late Tuesday afternoon just ahead of the Moody’s announcement, according to IHS Markit. The yield, which moves inversely to price, rose to 6.91 percent, the data showed.

Tesla raised a more-than-expected $1.8 billion in August for that junk bond offering to fund accelerated production for its Model 3 sedan, despite poor appetite at the time for risky assets.

Tesla had $3.4 billion in cash and securities at the end of last year, and $1.9 billion through its asset-based lending facility, the Moody’s release said. “This liquidity position is not adequate to cover:

1) the approximately $500 million in minimum cash that we estimate Tesla must maintain for normal operations;

2) a 2018 operating cash burn that will approximate $2 billion if Tesla maintains high discretionary capital expenditures to increase capacity; and

“These cash needs will likely require Tesla to undertake a near-term capital raise exceeding $2 billion,” Moody’s said in the release.

Previous: Longfin loses more than a third of its value after the controversial cryptocurrency stock is booted from the Russell 2000 index
Next: Euro Stays Strong after Volatility in Thin Holiday Markets