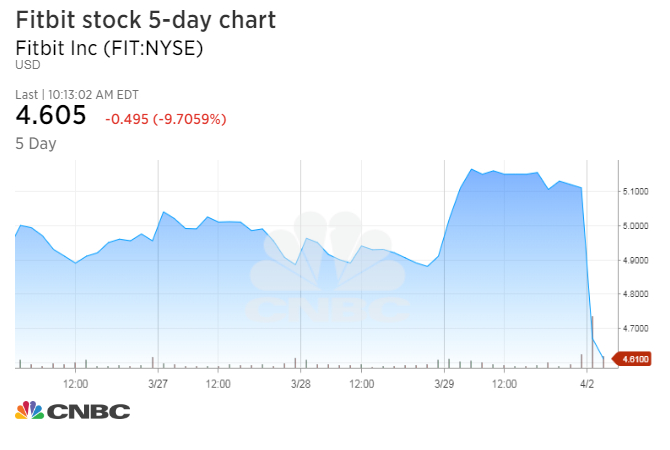 Fitbit fell sharply Monday after Morgan Stanley downgraded the stock, warning clients that it’s “hard to see a floor” for the price of company shares despite new technology.

“We see more downside to the stock as revenues struggle to stabilize and cash burn resumes,” analyst Yuuji Anderson wrote Monday. “We think new smartwatches will be outweighed by declines in legacy products, while software opportunities in health coaching will take time to ramp.”

Shares of the athletic watchmaker dropped more than 9 percent shortly, adding to a 30 percent decline over the past six months. Morgan Stanley goes to underweight from equalweight.

In justifying the analyst’s new underweight rating, Anderson said the recent pace of software and sensor development has not had a pronounced effect on demand. The analyst’s new 12-month price target of $4 (down from $5) implies downside of 21 percent for shares of Fitbit.

“If demand for new products does not rebound meaningfully, we would expect further downside to our estimates,” the analyst added. “Should demand decline faster, we see the stock leaning towards our bear case ($2).”

The company sold 15.3 million devices in 2017, a far cry from the 22.3 million sold in 2016. The company’s sluggish sales come as Apple’s new cellular smartwatch greater emphasis on healthhave boosted its own wearable business.

“Fitbit management has spoken often on the value of its data set, but we believe its strategic value also has limitations,” Anderson wrote. “Competitors (most notably Apple) are engaged in their own partnership agreements, and wearables data is only a part of a broader focus by the health care industry on electronic medical records and payer data.”