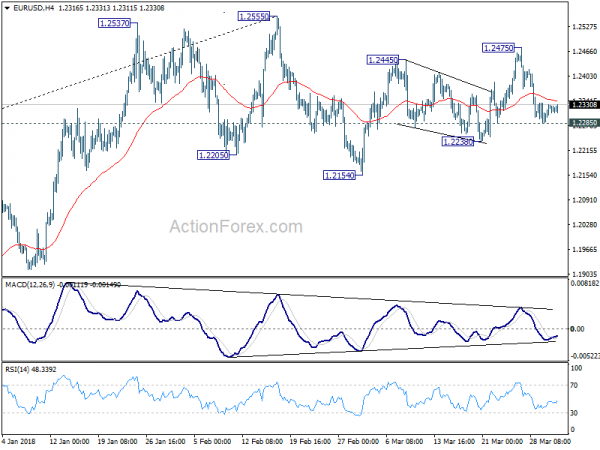 The forex markets are rather quiet today as most countries are still on holiday. Yen is trading generally lower but loss is limited so far. Japan Tankan survey posted some disappointing data but was shrugged off. Australian Dollar is also a touch weaker. Mixed data from China and the expectation of RBA standing pat and maintaining neutral stance is not providing much inspiration to Aussie. China formally started the refrained tariffs on 128 US products. While trading is subdued, there are a lot to look forward today during the week.

Technically, a key point to now is that EUR/USD, despite last week’s decline, is holding on to 1.2285 minor support. Thus, there is no confirmation of near term bearish reversal yet. GBP/USD is also holding above 1.3982 minor support. These two levels will be closely watched ahead.


There were slight deterioration in large manufacturing index from 26 to 24 and missed expectation of 25, and large manufacturers outlook from 21 to 20, missing expectation of 22. Large non-manufacturing index dropped to 23, down from 25 and missed expectation of 24. Large non-manufacturing outlook was unchanged at 20, below consensus of 21. Over business confidence were firm though. The fall in confidence and outlook is likely more due to Yen’s recent appreciation. And so far, the fear of a global trade war had limit impact on sentiments. The indices were calculated, like many other similar series in the world, by subtracting the number of respondents saying conditions are poor from those responding conditions are good.

Also released from Japan, PMI manufacturing was finalized at 53.1 in March, revised down from 53.2.

China starts tariffs on 128 US products, in response to 232 steel tariffs

China formally starts the tariffs on 7 types, 128 products from the US today, according to a statement (link in simplified Chinese) by the Ministry of Finance. This is part of the packaged announced last month which targets up to USD 3b in imports. And it’s a counter measure to the 232 steel and aluminum tariffs of the US that’s non-geo-targeted.

China’s response is seen by many as symbolic so far, and refrained. And the impact should be negligible comparing to the size of the bilateral trading relationship between the countries. Also, it’s reported that the US is already in negotiation with China regarding a trade deal. However, for now, China is still holding the cards regarding the Section 301 tariffs, which are targeted on Chinese goods that adds up to USD 50-60b of value.

Talking about the Section 301 tariffs, Trump administration is expected to announce the list of products to be affected. It’s believed that the list will concentrate on those affected by intellectual property theft only. And a major portion would be cutting-edge technology products.

China Caixin PMI manufacturing dropped to 51.0 in March, down from 51.6 and missed expectation of 51.7. That’s also the lowest level in four months. Dr. Zhengsheng Zhong, Director of Macroeconomic Analysis at CEBM Group noted in the release that “manufacturing PMI reading in March showed that demand was not as strong as expected, leading to lower willingness of manufacturers to produce and restock.”

However, “the ability of manufacturers to make a profit was beefed up by the stable increase in new orders and the much slower jump in input costs.” Zhong also noted that “the growth momentum of the Chinese manufacturing economy may have weakened in March, but at a marginal pace.”

RBA is widely expected to keep the cash rate unchanged at 1.50% tomorrow. Economists have been pushing back their expectation on the timing of an RBA hike after recent sluggish wage growth and inflation data. Late last year, there were speculations that RBA could hike twice by the end of this year. And now, markets are only pricing in around 40% chance of one hike in 2018. The majority expects that tightening won’t start until 2019.

While the job markets have been strong in Australia, wage growth remained sluggish. Unemployment rate has now stabilized at 5.5-5.6% after last year’s growth. However,the figure is floored by continue rise in participation rate. In that sense, the unemployment rate would stays away from hitting 5% level for a while, the level considered to be at full employment. That is, slack will remain in the economy.

RBA rate speculations, falling iron ore price and worries regarding US-China trade war left Aussie as one of the weakest back in March, in particular against Euro and Sterling. Aussie will likely stay pressured after tomorrow’s RBA rate statement.

ISM manufacturing will be the main focus today. And indeed, US data will be closely watched too, including ISM services, trade balance and non-farm payrolls. Other than that, UK will release PMIs while Eurozone will release CPI flash. Canada will release employment data and Ivey PMI too. It would also be a big week for Australian Dollar with RBA rate decision, retail sales and trade balance featured. But Aussie might react more to news regarding the trade tension between US and China.

At this point, EUR/USD is still holding above 1.2285 minor support and intraday bias remains neutral. On the upside, above 1.2475 will target a test on 1.2555 high, which is close to 1.2516 key long term fibonacci level. We’d be cautious on reversal from there. But decisive break will carry larger bullish implications. On the downside, below 1.2285 minor support will turn bias to the downside for 1.2154 and below to extend the decline from 1.2555.