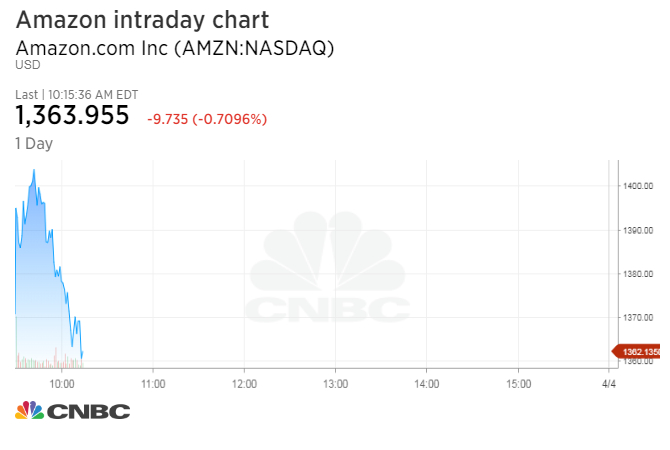 President Donald Trump took to Twitter for the fourth time in one week to bash e-commerce company Amazon on Tuesday.

This time, the president reinforced his assessment that Amazon’s business is costing taxpayers “many billions of dollars” through subsidized rates at the United States Post Office.

“I am right about Amazon costing the United States Post Office massive amounts of money for being their Delivery Boy,” Trump tweeted. “Amazon should pay these costs (plus) and not have them bourne [sic] by the American Taxpayer.”

Shares of Amazon declined after the president’s tweet and briefly turned negative on the day. The stock rose 2.4 percent after a Bloomberg report said that the White House has “no active discussions” about pursuing measures against Amazon, according to sources.

Asked to clarify his views later in the day, Trump said that the existing service practically gives Amazon a government subsidy.

“You have retailers all over the United States that are going out of business,” Trump said. “If you look at the cost that we’re subsidizing, we’re giving a subsidy to Amazon.”

The president has claimed in prior Twitter messages that the Post Office loses “a fortune” thanks to Amazon’s large shipping volumes while the company benefits from the government’s postal service.

Many would argue, however, that Amazon has been a positive for the postal service, which has suffered from bleak finances for more than a decade as other means of communication replace first class mail.

Still, Trump categorized Amazon’s relationship with the post office as a “scam” on Saturday.

The president’s extraordinary criticism of Amazon has also centered on the company’s policy of not collecting state and local taxes from the vast majority of its third-party sellers. The practice, Trump alleges, puts “many thousands of retailers” out of business, unable to survive against Jeff Bezos’ ever-growing consumer titan.

The president underscored his feelings toward the company in a tweet Monday morning, saying: “Our fully tax paying retailers are closing stores all over the country … not a level playing field!”

Amazon already collects state sales taxes on products it sells directly, but the company does not collect state sales taxes for its third-party platform outside of a handful of states. The third-party business represents roughly half of Amazon’s unit sales, according to multiple Wall Street firms.

Shares fell last week after Axios reported last Wednesday that Trump was considering changes to the retailer’s tax treatment, in part because of anger over how Amazon has hurt the commercial real estate industry because of its negative effect on brick-and-mortar retailers.