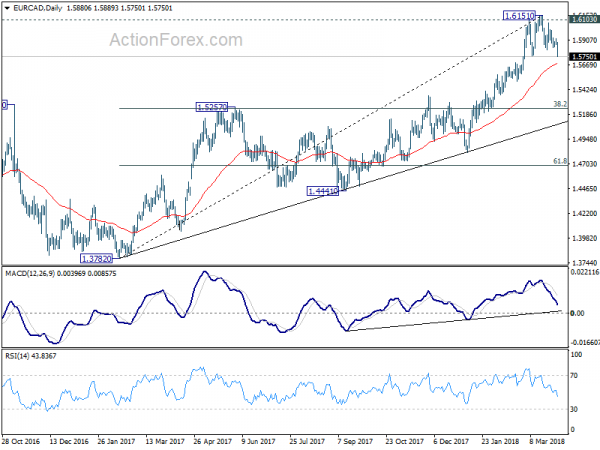 EUR/USD finally breaks 1.2285 support with some momentum in early US session. That could be seen as a sign that the forex traders are finally back from holiday, and starting to commit on a position. Events earlier today were important, but non-market moving. PMI data from UK and Eurozone were ignored. And RBA rate decision was like a non-event. With the selloff in EUR/USD now gathering steam, volatility could finally spread to other pairs and crosses.

In particular, EUR/CAD is a cross that’s worth a watch. Canadian seems benefit from news that US President Donald Trump is rushing to complete an initial NAFTA agreement by next week. With that, it would clear him of an important trouble. For now, USD/CAD is still holding above last week’s low at 1.2814. But EUR/CAD has already dived through 1.5833 support to resume the fall from 1.6165.

UK PMI manufacturing rose 0.1 to 55.1 in March, above expectation of 54.7. Markit noted that it signals “steady growth rate at the end of opening quarter”. Director at IHS Markit Rob Dobson noted in the release that “UK manufacturing has entered a softer growth phase so far this year”. And he emphasized that “the key question is whether growth can now be sustained, albeit at a lower level, into the coming months.” He pointed to steady business optimism at an “elevated level”, and moderating cost inflationary pressures. Thus, he noted “the sector looks set to make further slow and steady progress as we head through the spring.”

Eurozone PMI manufacturing was finalized at 56.6 in March, unrevised, down from February’s final reading of 58.6. It’s also the biggest fall in the series since June 2011. Markit noted broad slowdown across “all nations”. And there is increased signs of “supply chain constraints”. Chief Business Economist Chris Williamson sounded calm in the release. He said that “we should not be too worried by the fall in the PMI as some moderation in the pace of growth from the surge seen at the turn of the year was inevitable, not least because short-term capacity constraints limit the economy’s ability to grow so quickly for long periods.” And, “the overall pace of growth nevertheless remains robust by historical standards, with decent PMI readings seen in all countries”

BoJ Kuroda: There were internal discussions on stimulus exit

BoJ Governor Haruhiko Kuroda said those at the central bank are “conducting various discussions” regarding stimulus exit “internally”. However, it would confuse the markets by talking about the details now. And Kuroda said that would be inappropriate. In addition, Kuroda said the ETF buying program is “part of our monetary easing framework”. For now, “there is still some distance to achieving our price target”, we’re not in a stage to debate the timing and means to (slow) ETF buying”

RBA rate decision today contained little surprise. Policymakers left the cash rate unchanged at 1.5% and made few changes in the policy statement. The central bank remained upbeat on growth and employment. Yet, it remained wary of the slow growth in wage. Meanwhile, the members took note of the recent decline in commodity prices and higher global short term interest rates. While the next rate move would likely be a hike, it might not be implemented for the rest of the year.

What was new in this meeting was the discussion on the higher short term rates. The members noted the recent “tightening of conditions in US dollar short-term money markets”, as a result of Fed funds rate hike. The members indicated that higher rates have been transmitted to other economies, including Australia. Yet, this has not yet caused a problem in the country. We expect the RBA would continue monitoring the development for now.

More in RBA Aware of Recent Rise in Yields

China pledged retaliation to US at same proportion, scale and intensity

China’s Ambassador to the United States Cui Tiankai said the tariffs on 128 US products started this week were a measure to the 232 steel and aluminum tariffs only. For the Section 301 tariffs on the USD 50-60b Chinese imports to US, Cui pledged to take “countermeasures of the same proportion and the same scale, same intensity.” But for now, Cui said China has yet to decide on the countermeasures.

In an editorial in China Daily,  Wang Hailou, a researcher at the Chinese commerce ministry’s research center, said that “China does not like trade wars, but being on the side of justice, China has no choice but to enter a war to end a war.” The article also said that “It would be beneficial for all if (China’s) friendly overtures were accepted by Washington. However, at the moment it seems intent on turning a deaf ear to any suggestion that they each make concessions to reach an amicable agreement,”