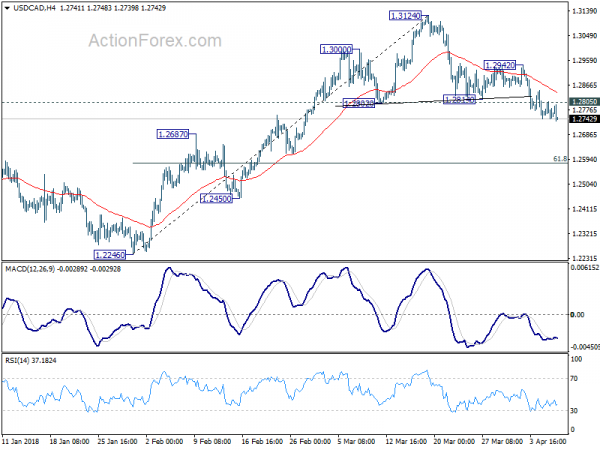 Reactions in the financial markets to the escalation in US-China trade tensions remain rather mild. Nikkei closed down just -0.36% today. European indices are in red at the time of writing. But DAX is down -0.5%, CAC down -0.3% and FTSE is nearly flat. US futures point to triple digit loss in DOW at open but it’s already they’ve already recovered much from early day selloff. The press briefing of Chinese Ministry of Commerce is highly anticipated but it’s briefer than a usual briefing. Nothing special is revealed there except the pledge to retaliate. It certainly lack the intensity of the Wednesday one.

After all, as we mentioned before, US will have to go through the process of public input till May 22 before finalizing that Section 301 tariff on USD 50b in Chinese imports. There is no implementation date for the this set of tariffs yet. And there is no list of products for the USD 100b of products yet. Even so, it’s just Trump’s proposal right now. There’s still a rather long way to go before US and China hit fire.


China Ministry of Commerce Spokesman Gao Feng delivered a rather unimpressive briefing, in response to US President Donald Trump’s proposal of tariffs on additional USD 100b of products. Gao just said that US action is extremely wrong, and with misjudgment in the situation. He pledged that China is ready and won’t hesitate to retaliate. And there will be immediately action is the US releases the USD 100b tariff list. Gao claimed that China has very detailed retaliatory measures.

Basically, Gao just said that we’re ready to hit the ball back hard. But it’s now still in your court.

War of words between Trump and China

Earlier today, the Chinese Ministry of Commerce issued a quick response to Trump’s intention to add tariffs to additional USD 100b of Chinese imports. It noted in a statement that China pledged to fight US unilateralism and protectionism “to the end, and at any cost”. And China will “firmly attack, using new comprehensive countermeasures, to firmly defend the interest of the nation and its people.” The MOFCOM also blamed that the the US “singlehandedly started the trade conflicts”. And it added that it’s “provocation of unilateralism of the US to global free trade”.

In a surprised move, Trump announced after yesterday’s market close he has just ordered the Trade Representative to consider tariffs on additional USD 100b in Chinese imports, in addition to the USD 50b list of 1300 product lines. In his own statement, Trump condemned China’s retaliation as “unfair” to “harm our farmers and manufacturers”. He also ordered the Secretary of Agriculture to “implement a plan to protect our farmers and agricultural interests”. USTR Robert Lighthizer supported Trump’s proposal and said it’s an “appropriate response” to China’s recent threat of new tariffs.

Dollar attempts to dip lower lower as initial reaction to the big miss in headline non-farm payroll number. But selloff is limited as the greenback is also supported by solid wage growth. The more notable move is seen in USD/CAD with Canada positing its own solid employment data. Otherwise, Dollar is held in familiar range.

ECB Cœuré: “Winding back globalization is the wrong solution”

ECB Executive Board member Benoît Cœuré warned of “consequence of protectionism” in a speech at a workshop today. He pointed out that greater global economic integration “has boosted living standards worldwide and lifted millions out of poverty.” And, while there are some associated problems, winding back is the “wrong solution. And, a retreat from openness will “only fuel more inequality” as import prices rise, goods become dearer and real incomes fall. The effect of globalization should be addressed by “targeted policies that achieve fairer outcomes.”

He also pointed to EU’s experience. He noted that “by allowing Member States to recover some of the state functions that have been eroded by globalization, the European Union is a vehicle that brings the benefits of economic openness to the greatest number of its citizens while protecting them against untrammelled global forces.” And, “it represents the most progressive model we have for taking back control of globalization by addressing people’s concerns over open markets and fair competition – doubts that individual countries on their own cannot dispel.”