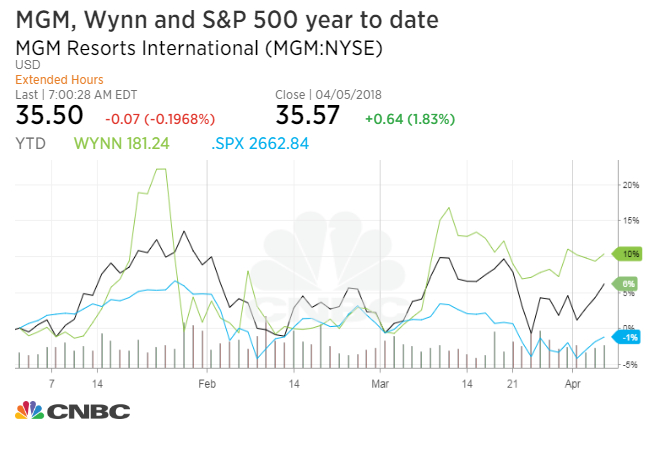 MGM Resorts may be interested in buying its casino rival Wynn Resorts, according to a report in the New York Post on Friday.

Despite earlier claims by MGM chief executive James Murren that it would be unlikely his company would make a bid, one source told the Post that Wynn CEO Matt Maddox could be tempted to sell if the price was right.

Other sources told the Post that MGM still has time to change its mind and that no official talks have occurred.

For its part, Wynn Resorts spokesperson Michael Weaver told CNBC that “Wynn has not had any discussion with MGM or its advisors about a sale of the company.”

Both companies are outperforming the S&P 500 this year; Wynn is up 7.5 percent and MGM is up 6.5 percent.

Wynn stock has encountered turbulence after The Wall Street Journal detailed allegations in January of decades of sexual misconduct by then-CEO Steve Wynn.

Following strong public backlash — and a loss of more than 10 percent in the company’s stock value — Wynn resigned as CEO and chairman in February. Wynn Resorts said last month Wynn no longer holds a stake in the company after he agreed to sell all his remaining 8 million shares.