The market could be getting Xi’s speech wrong, it doesn’t mean there won’t be a trade war 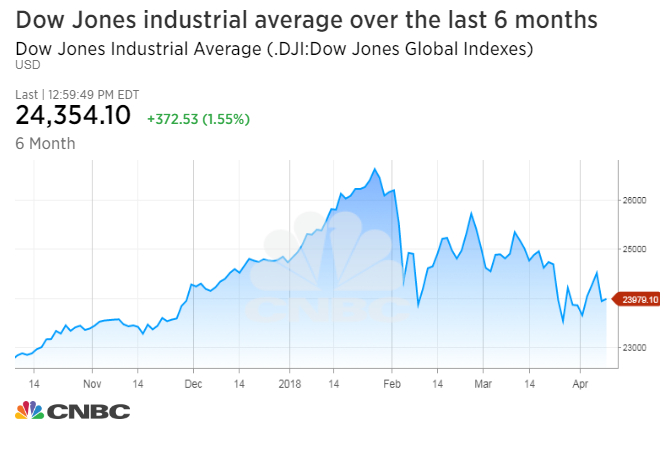 “There was nothing new in that speech. … What was included was incremental steps to expand market access,” said Scott Kennedy, a China expert at the Center for Strategic and International Studies.

“President Xi could have made much more significant offerings in the speech if he wanted to, without paying a domestic, political cost. But I think [Beijing’s] impression is the Trump administration can be bought off with some market adjustments in China without constraining Chinese industrial policy,” Kennedy said. “It’s part of a dynamic that suggests this is going to be a long, drawn-out contest.”

In his speech Tuesday at the Boao Forum for Asia, Xi emphasized Beijing’s plans to move forward with previously announced goals of making domestic markets more accessible to foreigners. Xi did not explicitly address the escalating trade dispute with the U.S., in which both the Trump administration and China’s Ministry of Commerce last week proposed tariffs on $50 billion worth of imports from the other country.

In contrast, Xi said Beijing will increase imports, significantly lower tariffs on automobiles and increase enforcement on intellectual property protection. “In short, China will enter a new phase of opening up,” he said, according to a state-backed media translation.

“If implemented swiftly and in full, we believe these moves will not only help alleviate trade tensions, potentially avoiding a full scale trade war, but will also improve China’s growth potential over the longer term,” the report said.

“Xi proposed actions which were previously promised and none address the reciprocity issues in U.S.-China relations,” Eurasia Group’s Managing Director Evan Medeiros and Asia Director Michael Hirson said in a note. “We assess that nothing in the speech will deter the U.S. from moving forward with tariffs.”

Reduced automobile tariffs “will not dramatically change the fortunes of U.S. car companies,” while “bland and generic commitments on IP protection fell short of what would have been a true gamechanger: an explicit announcement that China will address concerns over the Made in China 2025 initiative and other industrial policies,” the report said.

“Made in China 2025” is Beijing’s push for domestic companies to become leaders in high-tech industries such as robotics.

In a separate report Tuesday, Hirson said Beijing’s retaliation strategy focuses on exploiting divisions within the U.S., deterring U.S. allies “by occupying the moral high ground” and limiting “blowback to China’s own economy and strategic interests.”

Stocks have swung wildly in the last few weeks as traders worried about a trade war between the world’s two largest economies. But markets globally rallied following Xi’s speech, which did contrast with the defensive stance of China’s Ministry of Commerce on Friday. The German DAX gained 1.1 percent, the Shanghai composite rose more than 1.5 percent and the Nikkei 225 closed roughly half a percent higher.

U.S. President Donald Trump tweeted Tuesday afternoon that he is “very thankful” for Xi’s “kind words on tariffs and automobile barriers … also, his enlightenment on intellectual property and technology transfers. We will make great progress together!”

Also Tuesday, the World Trade Organization said China filed a complaint challenging Trump’s tariffs on imported steel and aluminum. It said China has requested 60 days of consultations with the United States on the steel and aluminum dispute. If that fails, Beijing could request a ruling from a panel of trade experts, The Associated Press reported.

Kennedy, who is director of the Project on Chinese Business and Political Economy at CSIS, said the increasingly tense situation is largely due to the leaders of both countries and could be resolved.

But he expects that companies will end up having to re-envision China’s place in their global supply chains and no longer depend on a stable relationship between the world’s two largest economies. “This is a new normal for the relationship companies and investors need to adapt to.”