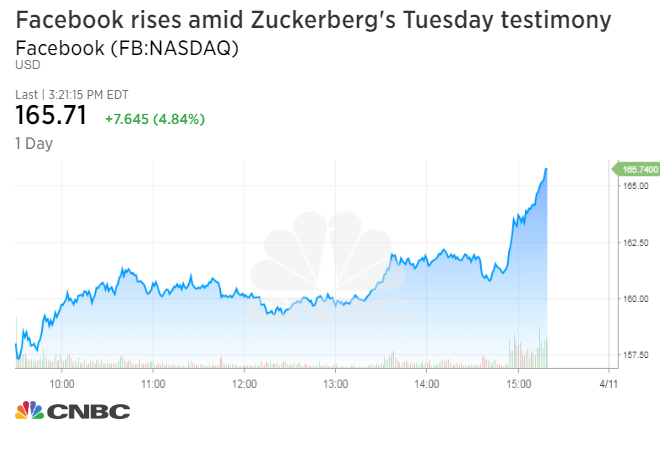 The stock was already up about 2.5 percent at 2:20 p.m. ET, around the time the hearing was set to begin.

Facebook shares hit a high of $195.32 per share in February, but have fallen almost 11 percent over the past month, amid reports that Facebook user data was misused.

Cambridge University researcher Aleksandr Kogan created a personality app in 2013 that was used by around 300,000 people, but was able to access information associated with millions of accounts.

Facebook says that data was later used by another firm, Cambridge Analytica, against Facebook’s rules — an abuse that was revealed by reporters at The Guardian, The New York Times and Channel 4 last month.Cambridge Analytica was affiliated with President Donald Trump’s campaign.

On Tuesday, Zuckerberg told a joint hearing of the Senate Judiciary and Commerce committees that Facebook was striving to correct issues with its platform, despite failing to notify the FTC about data issues.

In addition to details shared in his prepared remarks on Monday, Zuckerberg said Tuesday that while he takes responsibility for the content on Facebook, it’s a misunderstanding that any data regularly changes hands with Facebook advertisers.

“There’s a very common misconception about Facebook that we sell data to advertisers,” Zuckerberg said.

He also told members of Congress that he would welcome the right regulations, and that Facebook is cooperating with Special Counsel Robert Mueller’s investigation of alleged Russian interference in the 2016 presidential election.

The company’s delay in identifying Russian efforts to interfere in the 2016 election is “one of [his] biggest regrets in running the company,” Zuckerberg said.

But despite tough questioning, Zuckerberg stood by his view that Facebook maintain, at least in part, a free, ad-supported business model — a model that has catapulted Facebook to one of the most valuable public companies in the world and made Zuckerberg a billionaire.

“To be clear, we don’t offer an option today for people to pay to not show ads,” Zuckerberg said. “We think offering people an ad-supported service is the most aligned with our mission of trying to connect everyone in the world, because we want to offer a free service that everyone can afford. That’s the only way we can reach billions of people.”