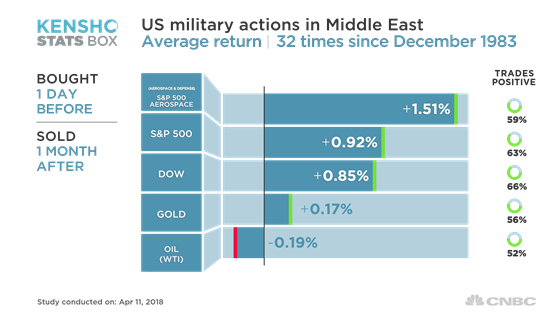 Shares of defense companies tend to outperform the broader market when the United States takes military action in the Middle East, history shows.

The S&P 500 aerospace sub-industry returned an average of 1.5 percent to investors a month after U.S. action in the region, according to CNBC analysis using Kensho. In turn, the S&P 500 and the Dow Jones industrial average gained just under 1 percent in such instances.

On Wednesday, the iShares U.S. Aerospace & Defense ETF (ITA) rose half a percent while the S&P 500 declined 0.3 percent. Shares of Lockheed Martin and Raytheon also rose nearly 1 percent each.

The possibility of U.S. intervention in the Middle East increased after President Donald Trump told Russia to “get ready” for a possible missile strike on Syria.

Trump said in a tweet: “Russia vows to shoot down any and all missiles fired at Syria. Get ready Russia, because they will be coming, nice and new and ‘smart!’ You shouldn’t be partners with a Gas Killing Animal who kills his people and enjoys it!”

Interestingly enough, crude has not acted predictably after U.S. interventions in the Middle East.

West Texas Intermediate futures post an average decline of 0.2 percent one month after a U.S. operation in the region starts, according to Kensho. U.S. crude rose 2.4 percent on Wednesday. It tends to spike higher when geopolitical tensions rise as potential attacks can disrupt oil’s supply chain.

Disclosure: NBCUniversal was a minority investor in Kensho prior to the firm being acquired by S&P.