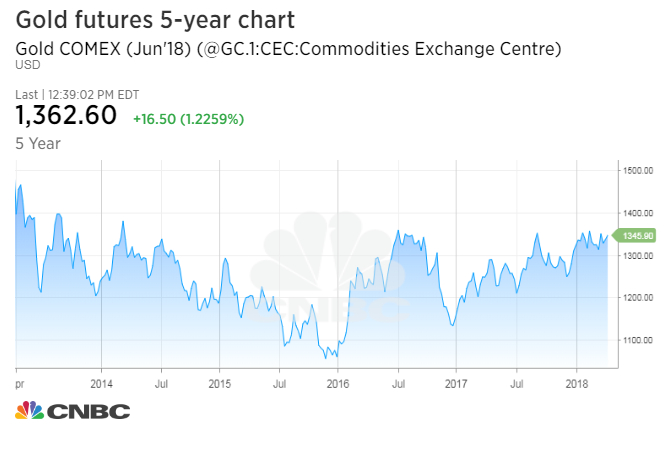 The metal’s price jumped markedly after Trump warned Russia to “get ready” for a missile strike in Syria following a recent chemical weapons attack allegedly carried out by the government of Syrian President Bashar Assad. Trump also criticized Russia’s government in a rare rebuke on Sunday, scolding Russian President Vladimir Putin for Moscow’s support of Assad.

Trump said in a tweet: “Get ready Russia, because [missiles] will be coming, nice and new and ‘smart!’ You shouldn’t be partners with a Gas Killing Animal who kills his people and enjoys it!”

Assets such as gold and U.S. Treasurys — considered less risky options by many investors — rallied immediately after the president’s comments. Investors have been patiently waiting for gold to break above its August 2016 high, around $1,377 an ounce, which would send the metal to levels not seen since March 2014.

Gold rose even after the latest data pointed to tame inflation. The Labor Department reported on Wednesday that consumer prices fell for the first time in 10 months in March, hampered by a decline in gasoline prices.

The department did report, however, that so-called core CPI — which excludes volatile energy and food components — climbed 0.2 percent to bring its year-on-year gain to 2.1 percent, its largest advance since February 2017.

“Gold can’t seem to get any momentum above $1,350, yet it doesn’t drop. So that’s been consolidating sideways,” Gundlach said last Wednesday. “It will be interesting to see which way they break.”