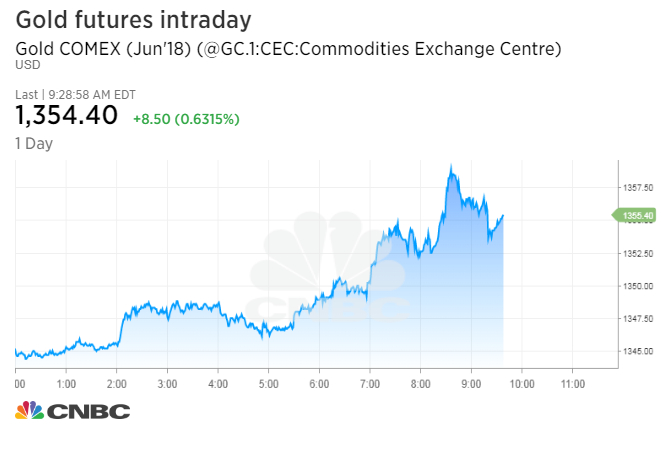 Gold, oil and Treasury prices jumped on Wednesday after President Donald Trump warned Russia that missiles “will be coming” to Syria via Twitter.

Trump said in a tweet: “Russia vows to shoot down any and all missiles fired at Syria. Get ready Russia, because they will be coming, nice and new and ‘smart!’ You shouldn’t be partners with a Gas Killing Animal who kills his people and enjoys it!”

The precious metal rose to its high of the day on the news, trading 0.7 percent higher at $1,355.30 per ounce as of 9:39 a.m. ET. Investors often hide out in gold during conflicts for safety.

U.S. Treasurys caught a bid as well, pushing yields lower, in another bid for safety. The two-year note yield fell to 2.307 percent while the benchmark 10-year yield slipped to trade at 2.775 percent.

The president’s threat comes after Russia’s ambassador to Lebanon said Tuesday that Russia would shoot down American missiles headed Syria’s way. This follows an apparent chemical weapons attack in Syria that left dozens dead over the weekend.