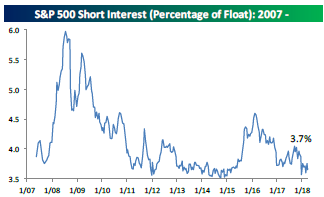 Wall Street is growing less confident in the technology sector and continues to be negative on retailers, according to the latest data on short selling.

Across the 11 S&P 500 sectors, five saw increases in the amount of available shares that are sold short, a bet that they will decline in value.

The biggest increases were in shares of technology companies, where the average short interest is now at a 52-week high, wrote analysts at Bespoke Investment Group. Consumer discretionary stocks remained popular bets as well. Short interest in the sector, which includes retailers, was the highest in the S&P.

In a short sale, a stock is borrowed and then sold with the hope it will decline in value so it can be repurchased later to pay back the loan with a profit. It is a strategy that is popular with hedge funds.

However, the impressive run in tech has some investors worried that the trade may have overshot its true value, with one-fifth of Advanced Micro Devices’ available shares sold short.

The technology hardware subsector also hit its highest short interest in a year, at 7.19 percent of available shares, Bespoke added. Drug and biotech stocks were not far behind.

Investors maintained their negative view on retailers. The average short interest as a percentage of shares available for trading was 14.7 percent, Bespoke wrote. That’s the highest level for any subsector on the Street, Bespoke added.

The most heavily shorted stock in the S&P 500 was Under Armour, with 36.8 percent of shares sold short, the report said. TripAdvisor was a popular bet, with 19 percent of shares available for trading sold short; Nordstrom and Kohl’s short interest hit 14.5 percent and 16 percent, respectively.