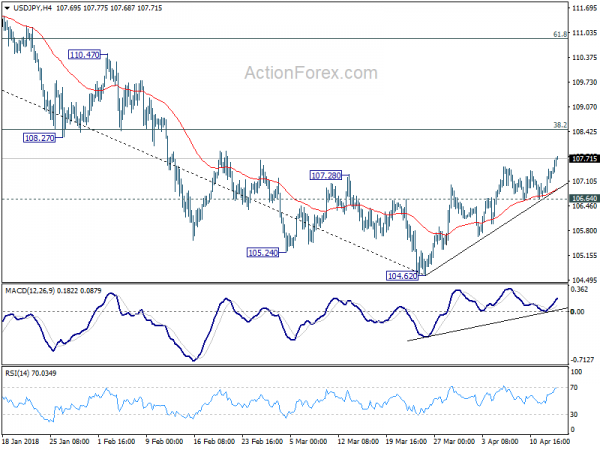 Yen continues to be the weakest one today as selloff intensifies in European session. Relieves from immediate risks are still as the major reason driving the Japanese currency down. Australian Dollar continues to be the strongest one with AUD/USD and EUR/AUD taking out key near term levels. Dollar was under some pressure earlier today but is supported by Fed Rosengren’s comments and turned mix entering into US session.

Ministers of three of TPP-11 members responded to news that Trump is considering to rejoin TPP. While all of the welcomed the news, they also said there will be no renegotiation on what were signed. Australia Trade Minister Steven Ciobo said today that “we welcome the U.S. coming back to the table but I don’t see any wholesale appetite for any material re-negotiation of the TPP-11.”Japan Minister Toshimitsu Motegi said the current deal is a “balanced one, like fine glassware” and it would be difficult to change. Malaysia International Trade and Industry Minister Mustapa Mohamed also warned that renegotiation would “alter the balance of benefits for parties.” These were in response to Trump’s tweet that “would only join TPP if the deal were substantially better than the deal offered to Pres. Obama.”

S&P Global Ratings upgraded Japan’s A+ outlook from “stable” to “positive”. S&P noted stronger economy should set the stage for fiscal improvement in Japan. The positive outlook reflects healthier growth prospect, in both real and nominal terms. The current rating also reflect Japan’s formidable external position, diversified economy, political stability and financial system stability. Nonetheless, it also pointed out that While Japan’s external balance sheet is strong, Government finances are weak. And that is a significant constraint of its creditworthiness.

China reported a rate trade deficit of USD -5b in March versus expectation of USD 27.8b surplus. That’s also the first monthly trade deficit since last February. Imports rose 5.9% yoy while exports dropped -2.7% yoy. Trade surplus with US dropped to USD 15.3b. In CNY terms trade balance came in at CNY -30b deficit versus expectation of CNY 160b surplus. Imports dropped -9.8% yoy while exports also dropped -9.8% yoy.

New Zealand BusinessNZ Performance of Manufacturing Index (PMI) dropped -1.1 to 52.2 in March. That’s also the second consecutive decline in 2018 even though it still signaled expansion. Nonetheless, BusinessNZ’s executive director for manufacturing Catherine Beard noted a positive point that the proportion of positive comments in March (55.1%) picked up from both February (51.4%) and January (50.7%).  BNZ Senior Economist, Craig Ebert said that the weak spot in March’s PMI was its production index.

USD/JPY’s rally extends to as high as 107.77 so far. Intraday bias remains on the upside for 38.2% retracement of 114.73 to 104.62 at 108.48 9 which is close to 108.12. This resistance zone will be crucial in determining the medium outlook. On the downside, break of 106.64 minor support is needed to indicate completion of the rebound. Otherwise, further rise will remain in favor even in case of retreat.