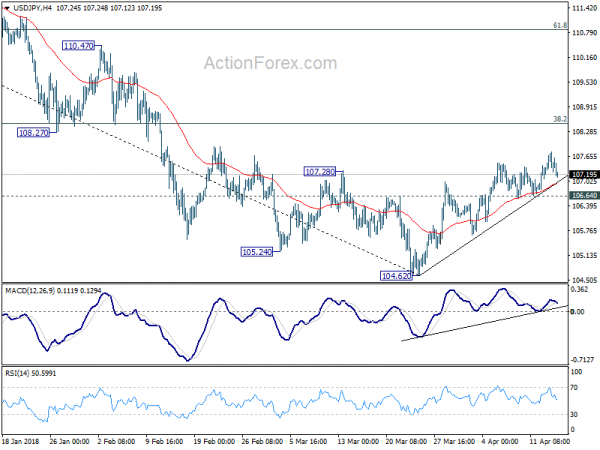 Yen is making a come back in Asian session today. The reaction to the Syria strike was muted. But risk aversion comes back with selloff in Chinese and Hong Kong stocks. Nikkei is maintaining slight gain of 0.25% at the time of writing. But China SSE and Hong Kong HSI are down -1.5% and -1.7% respectively. It’s too early to conclude that the Japanese yen is reversing recent near term decline. But development in major Yen crosses is worth some attention. In particular, 106.64 in USD/JPY is key near term support level to watch.

Elsewhere in the currency markets, commodity currencies including AUD, NZD and CAD are turning a bit softer. But there could be surprises ahead with important events scheduled. Those events include BoC rate decision, Canada CPI and retail sales, Australia employment and RBA minutes, New Zealand CPI and China GDP.

The outcome of the first high-level economic talks in eight years between China and Japan appeared to be positive. Japanese Foreign Affairs Minister Taro Kono and Chinese State Councillor Wang Yi met in Tokyo on Sunday. Both agreed to work on strengthening the relationship with more high level visits ahead.

Wang said that “I hope we can begin at a fresh starting point and discuss a new future, while promoting a new cooperative relationship. I want to have in-depth discussions on economic policies, cooperation on the belt and road initiative and further integration of East Asian countries.”

Kono also said that “I hope to hold active discussions about regional and global economic issues. I would also like to take this opportunity to further strengthen economic relations between Japan and China.”

Abe’s support plunged further ahead of meeting with Trump

Separately, Abe will meet with US President Donald Trump at the latter’s Mar-a Lago resort for two days this week starting Tuesday. Ahead of that, polls showed support for Abe continued to plunge. According to a poll by Nippon TV, support for Japan Prime Minister Shinzo Abe dropped to 26.7%, hitting the lowest point after taking office back in December 2012. Another survey by Kydo news agency also showed Abe’s supported from -5.4 points to 37%. Another poll by Asahi also showed Abe’s support at only 31%.

Recent suspected scandals have clearly hurt Abe’s popularity and raised doubts on whether can win a third term as PM as LDP leader in the September vote. Former Prime Minister Junichiro Koizumi questioned whether Abe may “resign around the time parliament’s session ends (on June 20)?”, as quoted in weekly magazine Aera. Koizumi also said that “situation is getting dangerous”.

After the meeting, Nieto said there were agreement to “accelerate” the efforts on NAFTA renegotiation. And he added “we hope in the coming weeks we can reach an agreement”.

Trudeau also said “we’d like to see a re-negotiated deal land sooner than later.” And, “we have a certain amount of pressure to try to move forward successfully in the coming weeks.”

Pence also said he left the summit “very hopeful that we are very close to a renegotiated NAFTA”, and “there is a real possibility that we could arrive at an agreement within the next several weeks.”

It’s believed that all parties would like to complete the deal by Mexican elections on July 1.

UK PM May to boost trade with Commonwealth family

The leaders of the 53 Commonwealth member states are meeting in the Commonwealth Heads of Government Meeting this week. UK Prime Minister Theresa May is expected to make use of her speech at the business forum today to boost trade as Brexit looms.

Ahead of the meeting, May said in a statement that “our Commonwealth family already accounts for one-fifth of global trade.” And “we must continue to work together to build further upon this solid foundation by building on our existing trade links and establishing new ones.” May is set to unveil new programs to boost Commonwealth-wide support to women-owned businesses. There will also be new funding for a new Commonwealth Standards Network to establish a common language for goods and services.

It’s an important week ahead in terms of economic data, given the background that three major central banks could raise interest rates in Q2. Fed fund futures are now pricing in 100% chance of a Fed hike in June. Retail sales, housing, regional Fed surveys and Beige Book report are not expected to alter this.

BoE is one that’s widely tipped to hike again in May. And the decision could very much depends on the CPI, employment and retail sales to be released this week.

BoC is generally expected to stand pat this week, given some slowdown in Q1. But still, BoC is expected to hike again the year as the NAFTA uncertainties are cleared, probably two more times. Speculation on the timing of the next move, though, will depends on this week’s BoC statement, as well as Canada CPI and retail sales.

In addition that the above, China GDP, RBA minutes, Australia employment, New Zealand CPI, German ZEW will also be watched.