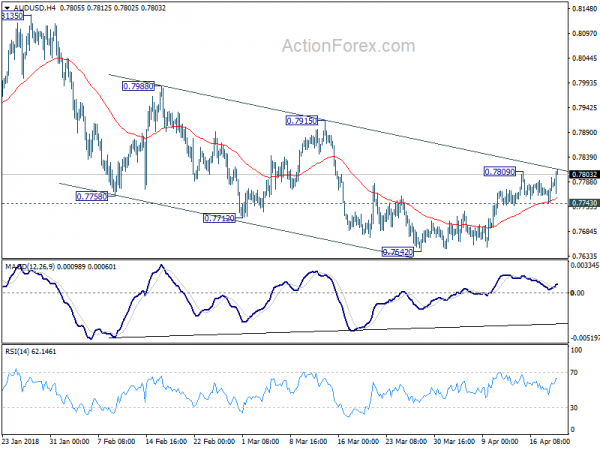 Commodity currencies are trading broadly higher today as led by Australian Dollar. Strong rebound in the Chinese stock markets is seen as factor helping the Aussie, as SSE is gaining more than 1% at the time of writing. Canadian Dollar is also recovering some of yesterday’s post-BoC loss. Sterling, on the other hand, is back under some pressure. But it’s the Japanese that’s weakest so far today. For the week up to this point, Swiss Franc is trading as the weakest one while Aussie is the strongest.

Technically, EUR/JPY’s breach of 132.96 indicates recent rebound from 128.94 is extending, even though momentum is a bit unconvincing. AUD/USD’s break of 0.7809 also indicates resumption of recent rebound from 0.7642. Focus will be on Sterling pairs. For now, despite yesterday’s selloff in the Pound, GBP/USD is holding above 1.4144, GBP/JPY above 151.15 and EUR/GBP below 0.8739. These level will be vulnerable on another data miss in UK retail sales today. In particular, EUR/GBP will be a pair that’s worth some attention.

Australia employment data miss is not a disaster

Australia Dollar is not too bothered by the weaker than expected headline job data from Australia. 4.9k jobs were added in March, below expectation of 20.3k. Full time jobs dropped by 19.9k to 8.51m while part time jobs rose 24.8k to 3.9m. Total employment was at 12.484m. Prior month’s figure was revised down from 17.5k to -6.3k. February now had the first monthly drop in employment since September 2016. The record streak of consecutive monthly job growth has shorted to 16 months.

Seasonally adjusted unemployment rate was unchanged at 5.5%, after downward revision in February’s figure from 5.6% to 5.5%. However, labor force participation rate rose to 65.7%, sitting at a record high in since the series began back in 1978. The figures just showed that growth in the Australian labor market is slowing after a very strong period since late 2016. .

Australia quarterly NAB business confidence was unchanged at 7 in Q1. Quarterly business conditions rose from 15 to 17. In the release, NAB noted that the quarterly business condition was at its highest level since 2007 even though the monthly survey data eased later in the quarter. Business confidence has been relatively stable since Q3 2016, staying within a range of 6 to 8, and was a little above historical average of 5. While there is no upward wage pressure, the conditions are in place due to tightening labor market.

Regarding RBA monetary policy, NAB noted that businesses are pricing in around 80% chance of a 25bps hike within 12 months. RBA itself noted that ” RBA will want clear evidence that wages growth and inflation are moving higher before removing some policy accommodation, and we don’t expect sufficient evidence of this until late 2018″. NAB expects RBA to have the first hike in November “with the risk that it occurs later”.

He added that “what really matters is the confidence and expectation and belief that we are aiming for that midpoint of 2 percent all of the time.” And he pledged that “we are doggedly determined to aim for two percent, but the accuracy around…that is very limited.”

Overall, with CPI now close to bottom of RBNZ’s target band, there is little pressure for the central bank to raise interest rates.

Canadian Dollar suffered some selling pressure overnight, but recovers in Asian session today. BoC has sent a mixed message with yesterday’s statement. Although the next rate adjustment remains a hike, the timing remains data-dependent and hinged on a number of uncertainties, including NAFTA negotiations and geopolitical tensions, something critical to Canada due to its position as oil exporter. Policymakers upgraded the assessment over the global economic outlook and remained optimistic over the domestic developments. However, they revised lower the forecast of GDP growth this year. The market has priced in 34% chance of a rate hike in May. We expect the next move to come in June. More in BOC Revised Lower Growth Forecast for 2018, Sent a Mixed Message

UK retail sales will be a focus in European sessions. Eurozone will release current account. Later in the day, US jobless claims, Philly Fed survey and leading index will be released.