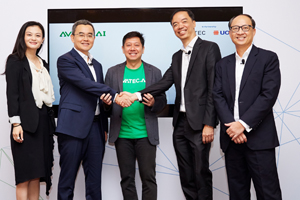 Singapore’s UOB has become the latest bank in Asia to try to harness the runaway success of Chinese fintech players. In April, it announced a new business called Avatec, a joint venture between UOB and China’s Pintec Technology Holdings. It aims to combine the bank’s skills in southeast Asia with the Chinese partner’s proven ability in big data.

The region has 600 million people, of whom only 27% hold a bank account, according to KPMG. In particular, access to credit is problematic, and this is where the joint venture expects to fill a gap: by developing more efficient and accurate ways of assessing the credit quality of potential customers. The result, in theory, is that UOB reaches a lot more customers without taking on a lot more risk.

Pintec is best known in China for its Dumiao digital lending platform, which uses third-party credit information and e-commerce transactions to generate credit decisions, with a heavy emphasis on artificial intelligence and machine learning. Its clients include China Telecom and the Sichuan-based online-only XWBank.

“We want to expand our solutions to other countries,” says William Wei, founder and chief executive of Pintec. “Southeast Asia is similar to China three years ago: a huge population, fast-growing economies, huge demand for financial services and an internet industry that is growing well.”

Zhou Jing, chief executive of the Dumiao subsidiary of Pintec, says that the 90-day delinquency rates on portfolios assembled using the same technology that the new JV will use are consistently below 2%.

“We have achieved efficiency, speed and effectiveness by using this technology,” she says.

However, there are specific reasons fintechs have fared so well in China, and it is not just about a huge population and a growing middle class. Just as important have been a benign regulatory environment, a banking system that has neglected the needs of retail, a population that is uncommonly confident in transacting through smartphones and a market that excludes many international e-commerce and social media players. So, can a Chinese model work across multi-jurisdiction southeast Asia?

Dennis Khoo, head of regional digital bank and strategic initiatives at UOB, says this is exactly the reason a partnership makes sense.

“There is a bigger question,” he tells Euromoney, “around how global retail banking is. I would say it isn’t that global. You still have to reckon with a lot of countries’ economics, demographics, the way things are done. This is why this venture makes sense: UOB has deep expertise in the region.”

A fintech coming in would not have enough local awareness about southeast Asian markets, he says, while banks do not have the tech in house to do what Chinese fintechs can do.

UOB will own 60% of the venture, Pintec 40%. Khoo says he does not expect non-performing loan levels to rise as a consequence of extending the UOB lending book through the new venture.

A study of digital banking in Asia released by McKinsey on April 17, based on 17,000 urban banked respondents in 15 Asian markets, showed just how quickly digital banking is gaining critical mass in Asia.

Meanwhile, the incursion of non-banks into the payments sector continues. Euromoney has reported on ride-sharing companies Grab and GoJek, and their new payment offerings, as well as airline AirAsia’s decision to launch a financial services division. Since then another airline has announced similar ambitions – Japan’s ANA.

ANA says it will use the data from 31 million users of its airline miles to provide services including real estate, insurance and health to Japanese consumers. It says that by 2022 it wants to generate 20% of its total revenue from the non-airline business. Its chief executive, Shinya Katanozaka, told the Financial Times: “We are aiming for ANA’s version of Alibaba’s Alipay.”

One interesting finding of the McKinsey survey was that consumers in emerging Asia do not seem particularly squeamish about the use of their data – even though by far the most common question at the UOB announcement was about data protection.

Around 62% of banking customers in emerging Asia are open to sharing data with banks in order to get customized offerings, according to McKinsey, a huge contrast to just 23% in developed Asia.

There is certainly no shortage of digital incursion into Asian banking. Recent notable events include Singapore’s DBS unveiling a methodology to measure the different returns on equity between digital and traditional clients. In India, telco Aditya Birla’s new financial services business launched a digital lending platform and State Bank of India launched the Yono app to acquire 600 million digital customers. In China, Ant Financial’s launched its Sesame Credit assessment engine and insurance group Ping An its Good Doctor platform, which combines financial services, insurance and online medical consultations and diagnosis. In Korea, there was the launch of Kakaobank, which acquired one million customers in its first five days by targeting Kakao’s 40 million chat users.