Quiet Start to a Week of Guaranteed Volatility, on Yields, Central Banks, Data and Politics 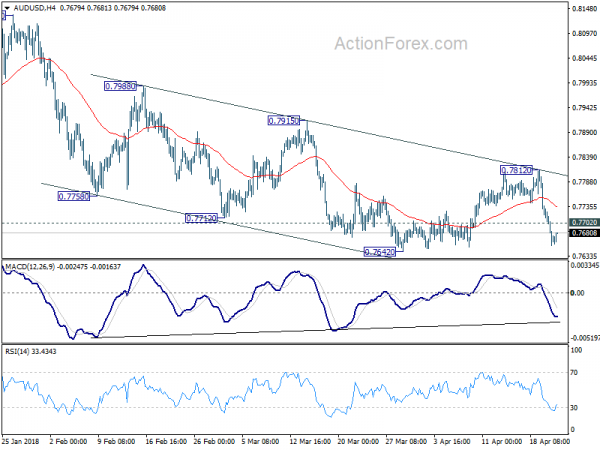 The financial markets are pretty quiet as another week starts. Despite positive news regarding Korean peninsula, major Asian indices are trading slightly lower. At the time of writing, Nikkei is down -0.28%, HK HSI is down -0.66%. In the currency markets, major pairs and crosses are bounded in Friday’s range, which are, admittedly quite wide. Sterling is recovering some losses and is broadly higher. Yen is trading in red in general.

The week ahead, nonetheless, almost certainly guarantees more volatility. In the financial markets, US Treasury yields is one that will catch much attention. Eyes will be on whether 10 year yield could break through 3% handle, and the subsequent reactions in stocks and Dollar.

Regarding central banks, ECB and BoJ will announce rate decisions. There is little expectation on BoJ as usual. But markets are still keen to get hints on what ECB would do when the asset purchase program ends in September. On economic data front, there will be Q1 GDP from US and UK, Eurozone PMIs and German Ifo, Australia inflation, New Zealand trade balance.

On Geopolitics, South Korean President Moon Jae-in will make another big step in peace of the Korean Peninsula by having the first high level summit with North Korean Leader Kim. Moon has already made tremendous progress in denuclearization of North Korea. Also, the May 1 deadline of US 232 steel and aluminum tariff exemption is approaching. And it’s so far uncertain on who will get their exemptions made permanent.

As for today, technically, EUR/CHF at 1.2 will be something that every currency trader look at, even if they don’t trade it. EUR/JPY will have its focus on 132.10 minor support. GBP/USD and AUD/USD will be pressing key near term support at 1.3965 and 0.7642 respectively. 1.2214 support in EUR will also be watched even though there is still a bit of distance from there.

Japan PMI manufacturing rose to 53.3 in April, up from 53.1 but missed expectation of 53.4. Joe Hayes, Economist at IHS Markit, noted in the release that the survey data depicted a positive backdrop in the Japanese manufacturing sector during April. And the improvements in the headline number was “underpinned by stronger rates of growth in output, new orders and employment.” Business confidence also “strengthened”. On the other hand, new export orders dropped for the first time since August 2016 as “stronger yen begins to impact price competitiveness”. But rise in total new business inflows also indicated “stronger domestic demand”.

BoJ Kuroda: Inflation to meet target in fiscal 2019, but risks are skewed to the downside

BoJ Governor Haruhiko Kuroda repeated his usual rhetoric that the central bank “must continue very strong accommodative monetary policy for some time” in order to reach the 2% inflation target. He pointed out that “if you exclude energy items, then inflation rate is only about 0.5 percent.” And, there is “still a long way to go to achieve the 2 percent inflation target.” Kuroda is still expecting inflation to hit target in fiscal 2019 but “risks are skewed to the downside,”

South Korea announced to stop broadcasting its propaganda along the border with North Korea, as a gesture of goodwill ahead of the highly anticipated Inter-Korean Summit at the border truce village of Panmunjom on Friday.

South Korean President Moon Jae-in has made tremendous progress in solving the Korea crisis by continuously seeking dialogue. The meeting between high level officials of the two countries earlier this year was the turning point. And, the limited, yet successful, joint participation in recent Winter Olympic in the South created a crucial diplomatic window for the relationship.

It’s only the third top level summit between the two countries, with the two previous meetings held back in 2000 and 2007. Ahead of the meeting, North Korea has announced to suspend nuclear and missile tests effective immediately. Its northern nuclear test site will also be abolished. And now, a formal end to the Korean War is also on agenda in the meeting between Moon and North Korean leader Kim Jong-un.

Considering that South Korea was in a mess when Moon took office last May. His predecessor was impeached for corruption. The achievements domestically and diplomatically deserved much recognition. And that’s a main reason Moon is chosen as the 4th of the World’s 50 Great Leaders by Fortune as announced last week.

Euro has been rather resilient against Dollar and Yen this week. But it will be facing tests from sentiment indicators as well as ECB rate decision and press conference. Eurozone PMIs and German Ifo could add to evidence that Eurozone is slowing down from stellar growth. And more importantly, ECB could continue to sound cautious and noncommittal to ending asset purchase program after September. These would be factors in triggering a downside breakout in EUR/USD.

US and UK GDP will also be closely watched. BoE Governor Mark Carney clearly indicated last week that a May BoE hike is not a certainty. Sterling’s selloff could accelerate if Q1 GDP disappoints again. Dollar, on the other hand, will look into Q1 GDP, along with developments in treasury yield, to solidify recent upside momentum.

Other than those events, Australia CPI, New Zealand trade balance will also be watched. BoJ rate decision, on the other hand, will likely be a non-event.

Here are some highlights for the week ahead

AUD/USD recovers mildly today but intraday bias remains on the downside with 0.7702 minor resistance intact. Break of 0.7642 support will resume the whole decline from 0.8135 and target 0.7500 key support level next. Break there will indicate medium term reversal. On the upside, above 0.7702 minor resistance will turn intraday bias neutral and bring consolidations. But recovery should be limited below 0.7812 resistance to bring fall resumption.