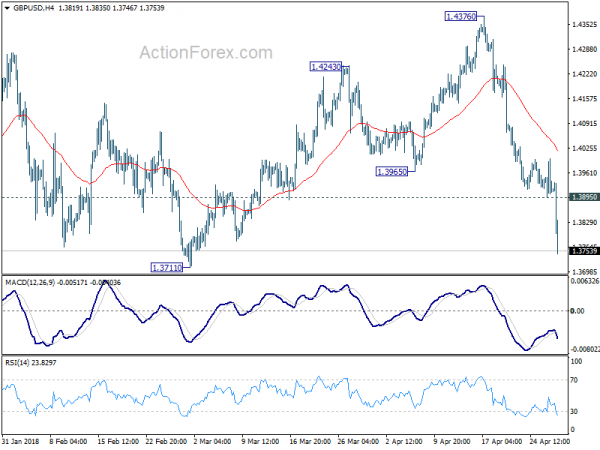 Dollar’s rally seem to be a bit exhausted in early US session. After all, the greenback was lifted firstly by yield earlier this week, then by ECB yesterday. Additional buying jumped in after French GDP miss and than UK GDP miss in European session. Hence, even though the greenback is picking up its rally against Euro and Sterling after stronger than expected US GDP, the movement is limited. Dollar is also stuck in tight range against Yen, Aussie and Loonie.

GBP dives sharply as Q1 GDP grew merely 0.1% qoq much worse than expectation of 0.3% qoq and prior quarter’s 0.4% qoq. Also, that’s the weakest quarterly growth figure in five years. Annual rate was unchanged at 1.4% yoy. Index of services rose 0.4% 3mo3m below expectation of 0.6%. The data could be the final nail to close the case of a May BoE rate hike. After all, with CPI slowed more than expected to 2.5% yoy in March, there is a lot of room for BoE to wait until November before raising interest rate again.

Chancellor of the Exchequer Philip Hammond blamed the weak data on weather. He said in an email statement that “today’s data reflects some impact from the exceptional weather that we experienced last month, but our economy is strong and we have made significant progress.” He added that “our economy has grown every year since 2010 and is set to keep growing, unemployment is at a 40 year low, and wages are increasing.”

On the other hand, Rob Kent-Smith, the ONS’ head of national accounts said in a statement that “our initial estimate shows the UK economy growing at its slowest pace in more than five years with weaker manufacturing growth, subdued consumer-facing industries and construction output falling significantly.” And, “while the snow had some impact on the economy, particularly in construction and some areas of retail, its overall effect was limited with the bad weather actually boosting energy supply and online sales.”

SNB Chairman Thomas Jordan said today that recent surge in EUR/CHF just represents “a reduction in the significant overvaluation” of the Swiss Franc. But he maintained that “our currency nevertheless remains highly valued”. And he maintained that SNB should continue with an expansionary monetary policy with negative interest rate. In addition, “our continued willingness to intervene in the foreign exchange market as necessary”.

Jordan further explained that “both instruments remain essential as the situation is still fragile. While the foreign exchange market has largely shrugged off recent equity market turbulence, circumstances in the financial markets – and thus by extension monetary conditions for the economy – could rapidly deteriorate again.”

Also, he pointed out that “inflation remains low and inflationary pressure is modest despite our expansionary monetary policy. Tightening monetary conditions would be premature at this juncture, and would risk unnecessarily jeopardizing the positive economic momentum that has been established.”

Fresh selling was seen in Euro after French data miss. French GDP growth slowed to 0.3% qoq in Q1, down from prior quarter’s 0.7% qoq and missed expectation of 0.4% qoq. Annual rate decelerated to 2.1% yoy, down from 2.6% yoy, and missed expectation of 2.3% yoy. From Germany, import price index rose 0.0% in March. Unemployment dropped -7k in April. Unemployment rate was unchanged at 5.3%.

ECB Executive Board member Yves Mersch said today that inflation will rise only gradually. He said in Sofia “overall, the underlying strength in the euro area economy continues to support our confidence that inflation will converge towards our aim over the medium term.” But he added that ” inflation convergence will likely proceed only gradually, and remains contingent on a highly accommodative monetary policy stance.”

Also, Mersch added that “the transition towards policy normalization will begin once the Governing Council assesses there has been sustained adjustment in the path of inflation.”

Separately, ECB Governing Council member Benoit Coeure said Eurozone growth isn’t just recovery but an expansion. He added that there is solid and broad based expansion in the region.

GBP/USD’s decline from 1.4376 resumed after brief consolidation and accelerated to as low as 1.3746 so far. Intraday bias remains on the downside for 1.3711 key support level. Decisive break there should confirm medium term reversal and target 1.3448 fibonacci level. On the upside, above 1.3895 will turn intraday bias neutral and bring consolidations first, before staging another fall.

In the bigger picture, bearish divergence condition in daily MACD is raising the chance of medium term reversal. Also, note that GBP/USD has just failed to sustain above 55 month EMA (now at 1.4257) again. Focus is back on 1.3711 support. Firm break there will confirm medium term reversal and target 38.2% retracement of 1.1936 (2016 low) to 1.4376 at 1.3448 first. Break will target 61.8% retracement at 1.2874 and below. For now, sustained break of 55 month EMA is needed to confirm medium term upside momentum. Otherwise, we won’t turn bullish even in case of strong rebound.