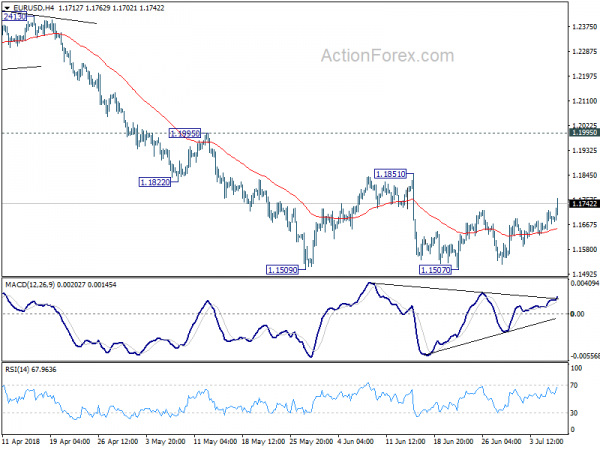 Dollar trades notably lower in early US session despite stronger than expected headline NFP number. The rise in unemployment rate and slower than expected wage growth could be the factors. But it’s more likely just continuing this week’s pull back after NFP risk is cleared. Yen is following as the second weakest one for today. Meanwhile, Aussie and Kiwi are trading as the strongest, followed by Euro.

Non-farm payroll report showed 213k growth in June, above expectation of 190k. Prior month’s figure was revised up from 223k to 244k. Unemployment rate rose to 4.0%, up from 3.8%. But that’s mainly thanks to rise in participation rate from 62.7% to 62.9%. Wage growth was a miss though as average hourly earnings rose 0.2% mom versus expectation of 0.3% mom. Also from the US, trade deficit narrowed slightly to USD -43.1B in May.

In response to the start of US section 301 tariffs on USD 34B in Chinese import, Chinese Foreign Ministry spokesman Lu Kang said in a daily media briefing that “after the United States unfairly raised tariffs against China, China immediately put into effect raised tariffs on some U.S. goods.” Lu also reiterated that “On the specifics of the trade issue, from the start China’s position has been very clear and consistent. The United States at all levels is very clear on China’s position,”

Commenting on the issue, Chinese Premier Li Keqiang said in Bulgaria that trade war is “never a solution” and there will be no winner. And, “it benefits no one and it would undermine the multilateral free trade process,” he said. “If one insists on waging a trade war it would hurt others and themselves.” He reiterated that China is committed to further opening up its markets. But, “if any party resorts to increase of tariffs, china would take measures in response to protect china development interests and safeguard multilateral trade regime and rules.”

Trump threatens tariffs on USD 500B of Chinese goods

US Section 301 tariffs on USD 34B of Chinese imports takes effect today. Ahead of that, Trump raised his threat again and warned of tariffs on up to USD 500B of Chinese goods. He told reports that “you have another 16 (billion dollars) in two weeks, and then, as you know, we have $200 billion in abeyance and then after the $200 billion, we have $300 billion in abeyance. Ok? So we have 50 plus 200 plus almost 300.”

The office forecasts the economy to grow 1.5% in the fiscal-2019, in price adjusted real terms. That’s after adjustment to the planned sales tax hike in October 2019. In nominal term, GDP is projected to grow 2.8%.